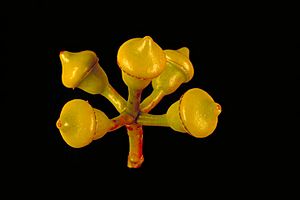 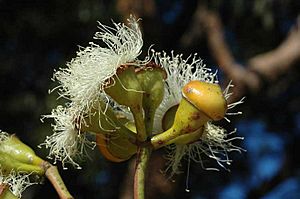 Corymbia watsoniana, commonly known as the large-fruited yellowjacket, is a species of tree that is endemic to Queensland. It has rough, tessellated bark on the trunk and branches, egg-shaped to broadly lance-shaped adult leaves, flower buds in groups of seven, creamy white flowers and barrel-shaped or urn-shaped fruit.

The large-fruited yellowjacket was first formally described in 1877 by Ferdinand von Mueller who gave it the name Eucalyptus watsonianain his book Fragmenta Phytographiae Australiae. The specific epithet honours "Th. Wentworth Watson" who collected the type specimens near Wigton. In 1995, Ken Hill and Lawrie Johnson changed the name to Corymbia watsoniana, publishing the change in the journal Telopea.

In the same paper, Hill and Johnson described two subspecies and the names have been accepted by the Australian Plant Census:

This eucalypt grows in forest, mainly on flat areas with sandy soil. It is found between Springsure, Rolleston, Eidsvold, Gayndah and the Barakula State Forest.

All content from Kiddle encyclopedia articles (including the article images and facts) can be freely used under Attribution-ShareAlike license, unless stated otherwise. Cite this article:
Corymbia watsoniana Facts for Kids. Kiddle Encyclopedia.