Eidsvold is a small town and locality in the North Burnett Region of Queensland, Australia. The town is the self-proclaimed Beef Capital of the Burnett and is a hub for the regional cattle industry. In the 2011 census, Eidsvold had a population of 630 people. 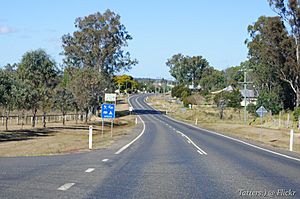 Arriving at Eidsvold from the north on the Burnett Highway, 2011

The town is named for Eidsvold Station, a nearby property, that is named for Eidsvoll, Norway (using the pre-1918 spelling) where the Norwegian Constitution was signed in 1814. The station was given this name by the Archer brothers, settlers who had land holdings in Norway. The Eidsvold run was licensed to Thomas Archer in June 1848. The Town Reserve, 3 miles (4.8 km) east of the station homestead, was proclaimed 19 March 1890, and the post office opened 19 September 1887.

Eidsvold has a number of heritage-listed sites, including:

All content from Kiddle encyclopedia articles (including the article images and facts) can be freely used under Attribution-ShareAlike license, unless stated otherwise. Cite this article:
Eidsvold, Queensland Facts for Kids. Kiddle Encyclopedia.