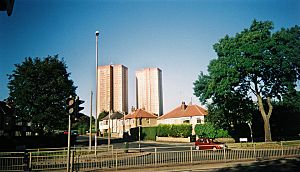 View of the Cottingley flats from Ring Road Beeston

Cottingley is an urban area in the south-west of Leeds, West Yorkshire, England.

Most of Cottingley is a 1960s council estate. The area falls within the Beeston and Holbeck ward of the Leeds City Council. The two tower blocks situated on a hill at the centre of the estate are Leeds's tallest flats. In the 1980s, these were in a poor condition, and had particular problems with squatters. At the end of the decade, they were refurbished and their condition was improved.

Cottingley railway station serves the area. It is situated on the Leeds to Huddersfield line and was opened in 1988.

The Cottingley estate was built in the 1970s, replacing an estate of temporary prefabricated housing that had previously been on the site. The estate was built on 'New Town Principles' (similar to Bransholme in Kingston upon Hull), the estate is set around a series of cul de sacs, segregating large volumes of traffic from housing and pedestrians. This method of building has often been criticised as creating a 'rabbit warren', impractical for the local police. Although on larger estates of similar style this causes a problem, the effects on Cottingley have been minimal.

One criticism of Cottingley is its lack of local amenities, there is Junction 1 Retail Park which includes a B&Q warehouse, an Aldi supermarket, Maplins and a Burger King. It also featured a PC World, but this has now shut down. However the nearby town of Morley and the White Rose Centre provide supermarkets, pubs and other entertainments.

All content from Kiddle encyclopedia articles (including the article images and facts) can be freely used under Attribution-ShareAlike license, unless stated otherwise. Cite this article:
Cottingley, Leeds Facts for Kids. Kiddle Encyclopedia.