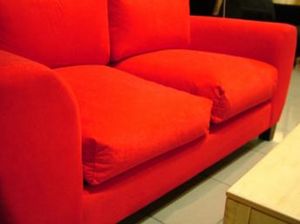 Couches come in many kinds of colors such as red.

A couch, sofa or settee is a kind of furniture that is designed to seat more than one person. It usually has a place to rest your arm on each side. Couches are normally found in the living room or in front of the TV.

In the 17th and 18th centuries, a couch was thought as a long, upward seat for resting on. One end would slope up high enough to provide a place for the head to rest. Some late 18th-century kinds of couches had an arm running partly down one side, and this type continued to be made in England. In Greek places, there were flowing designs with all kind of elegant colors. Many of them had scrolled ends and short legs. The couch was later taken over by the overstuffed sofa during the Victorian age.

Because the couch is usually set in front of the TV, it is the main place where people usually sit and watch it. Lazy people would eventually seem to be stuck to it all the time. This person, a person who does not do a lot of physical activity, was called a "couch potato". This was also because potatoes do not move at all, and does not do anything but just sits there. This may also be considered as slang. Couch came from the word couche, which means, "a bed, lair," or from the word coucher, which means "to lie down."

The most common types of couches in homes are the "love seats" for two, or the "sofa" for more than two. Other couches include the divan or the "fainting couch", which usually does not have a back. Couches are usually bought in a set together with cushions, which give them a bouncey and decorative comfortable touch.

All content from Kiddle encyclopedia articles (including the article images and facts) can be freely used under Attribution-ShareAlike license, unless stated otherwise. Cite this article:
Couch Facts for Kids. Kiddle Encyclopedia.