Countess of Ségur facts for kids 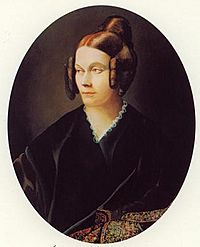 The Countess of Ségur

Her father Count Fyodor Rostopchin was lieutenant-general and, later, Minister of Foreign Affairs for Russia. In 1812, he was governor of Moscow during the invasion of the Grande Armée under Napoleon I of France. While facts concerning the origin of the great fire of Moscow are disputed by historians, Sophie Rostopchine's father has been said by some to have organized (despite opposition from the wealthy property-owners in the city) the great fire which forced Napoleon to make a disastrous retreat.

In 1814 the Rostopchine family left Imperial Russia for exile, going first to the Duchy of Warsaw, then to the German Confederation and the Italian peninsula and finally in 1817 to France under the Bourbon Restoration. In France, the father established a salon, and his wife and daughter converted to Roman Catholicism from Russian Orthodoxy.

It was in her father's salon that Sophie Rostopchine met Eugène Henri Raymond, Count of Ségur (Fresnes, Seine-et-Marne on 12 February 1798 – Château de Méry-sur-Oise 15 July 1869), whom she married on 13/14 July 1819. The marriage was largely an unhappy one: her husband was flighty, distant and poor (until being made a Peer of France in 1830), and his infrequent conjugal visits to their château des Nouettes (near L'Aigle, Orne) produced eight children, including Nathalie de Ségur and the father of the historian Pierre de Ségur (Eugène de Ségur is said to have called his wife "la mère Gigogne", or "Mother Gigogne" in reference to a theatre character of 1602, an enormous woman out of whose skirts a crowd of children appeared).

The Comtesse de Ségur wrote her first novel at the age of 58.

The novels of the Countess of Ségur were published from 1857 to 1872 in the "Bibliothèque rose illustrée" by the publishing house Hachette. They were collected together in 1990 under the title Œuvres de la comtesse de Ségur in the collection "Bouquins" (publisher: Robert Laffont). 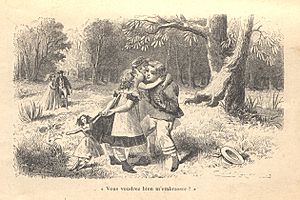 Do you want to give me a kiss?

All content from Kiddle encyclopedia articles (including the article images and facts) can be freely used under Attribution-ShareAlike license, unless stated otherwise. Cite this article:
Countess of Ségur Facts for Kids. Kiddle Encyclopedia.