The coussin de Lyon is a sweet specialty of Lyon, France composed of chocolate and marzipan and created by Voisin, a French chocolatier. This tidbit is a piece of pale green marzipan, with dark green stripe, filled with a chocolate ganache flavored with curaçao liqueur.

During the plague epidemic in 1643, the aldermen of Lyon made the vow to organize a procession at Fourvière to implore the Virgin Mary to save the city. They carried a seven-pound candle of wax and a gold crown on a silk cushion. This gave the chocolatier Voisin, based in Lyon since 1897, the idea of using the shape of the cushion to create this confection in 1960. It has become the most popular French specialty confection containing chocolate ganache. 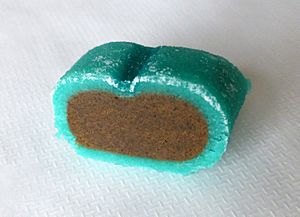 Cross-section of a coussin

This delicacy has become very popular. It is possible to buy the "cushions" individually, and also in velvet boxes which recall the original form of silk cushion.

The Boucaud family has a monopoly in marketing the coussins, which it makes in its network of retail stores across the Rhône-Alpes region and in Marseille. The manager of the company Voisin, Paul Boucaud, says that the company manufactures eighty-five tons of coussins of Lyon a year and that production increases by 10% annually. The family does not use large retailers to market its product.

All content from Kiddle encyclopedia articles (including the article images and facts) can be freely used under Attribution-ShareAlike license, unless stated otherwise. Cite this article:
Coussin de Lyon Facts for Kids. Kiddle Encyclopedia.