Cows is a Canadian ice cream manufacturer and chain of ice cream parlors based in Charlottetown, Prince Edward Island. Cows was founded in Cavendish, Prince Edward Island in 1983, and has since expanded into cheddar cheese, and cow-themed merchandise. Cows was named "Canada's best ice cream" in a survey of readers of Reader's Digest and named the world's top place to get ice cream by Tauck World Discovery. 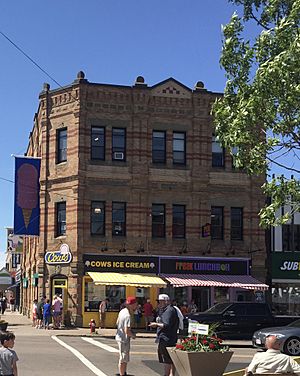 The original "Cows T-shirt" design was created by a PEI graphic artist Marc Gallant in 1987. He went on creating several "whimsical cow themed designs" for 7 years until his death in 1994. Shortly after, Cows President Scott Linkletter hired Graphic Designer Shawn Mader to continue the line. From 1994 to present day, Shawn has created over 150 unique Cow designs, adorning everything from the Cows classic 100% cotton T-shirt to calendars, mugs, pens, etc.

In 2007 Cows announced that they would be building a new 25,000 square feet (2,300 m2) corporate office in Charlottetown, paid for by a loan from the government of Prince Edward Island. The new Cows facility would be modeled after the Vermont-based Ben & Jerry's headquarters, and would serve as both a centralized production facility for all Cows ice cream and shirts. The new headquarters will also act as a tourist attraction where visitors can watch the ice cream and clothing being produced. In 2008 the plan for the facility had grown to 32,000 square feet (3,000 m2) integrating a production area for cheese.

In 2006 Cows expanded their brand to include cheddar cheese. The expansion came after Cows owner Scott Linkletter took a trip to the Orkney Islands in Northern Scotland. Linkletter was taken by the local cheese and partnered with a local cheese maker who would give him the recipe which would in turn be the foundation for Cows "signature cheese", Avonlea Clothbound Cheddar. While developing the recipe for Avonlea Clothbound Cheddar, Linletter and Prince Edward Island cheese maker Armand Bernard created a second cheese, PEI Cheddar.

Cows produce over 32 varieties of ice cream, with flavors such as "Gooey Mooey" and "Wowie Cowie".

All content from Kiddle encyclopedia articles (including the article images and facts) can be freely used under Attribution-ShareAlike license, unless stated otherwise. Cite this article:
Cows Creamery Facts for Kids. Kiddle Encyclopedia.