Craigs Dolmen (also known as the Broad Stone) is situated three miles north of Rasharkin, County Antrim, Northern Ireland, close to a minor road, at a height of 200m on the Long Mountain. Craigs Dolmen passage tomb is a State Care Historic Monument in the townland of Craigs, in Borough of Ballymoney, at grid ref: C9740 1729.

It features a big capstone on seven upright stones and is wrongly assumed to be a dolmen, actually being a Passage tomb. The capstone was shattered in 1976 by lightning. It was repaired in 1985 and excavation at the time showed that the chamber was the remains of a passage tomb. It was probably built before 2000 BC, but re-used for burial in the Bronze Age.

The large capstone over the entrance and the first chamber of this 3-chambered tomb was re-erected using an upright stone at the rear which probably was not an original feature. The almost semicircular forecourt faces south-east. The Broad Stone was only a popular place for meetings and assemblies. 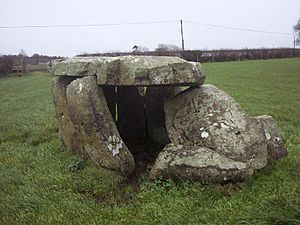 On the other side of the road and 800m south-west is a small passage tomb. Seven close, tall uprights support a flat capstone measuring 210x160cm. On the south-west side, two fallen stones may be the remains of a short passage. No cairn survives.

All content from Kiddle encyclopedia articles (including the article images and facts) can be freely used under Attribution-ShareAlike license, unless stated otherwise. Cite this article:
Craigs Dolmen Facts for Kids. Kiddle Encyclopedia.