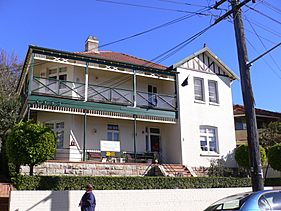 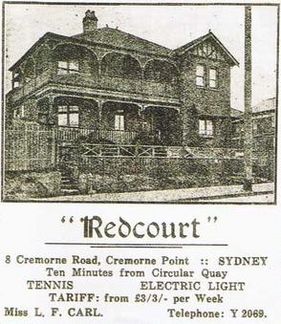 Cremorne Point Manor is a 4 star boutique hotel in North Sydney, Australia. It is established in a 19th-century federation style 2 story building on Cremorne Road, Cremorne Point, which has been designated by the government of New South Wales as a North Sydney Heritage.

Cremorne Point Manor was once a guesthouse named Redcourt. According to a tourist guide advertisement of 1927/28, one Miss L. F. Carl was a contact person for Redcourt. Public records show that the 19th century federation style 2 story building used to be 8 Cremorne Road until the property was split in a deed in 1988, then it became 6 Cremorne Road. The building overlooks Cremorne Point and Mosman Bay. It was once restored, later renovated and modernised, but maintains its 19th-century federation style.

As Lex Hall wrote in the Weekend Australian of 24–25 February 2007, "The hotel is believed to have been built in the late 1880s, when a coal seam was discovered in Cremorne. Fortunately, the plan to mine the seam was scotched, thanks to stiff opposition from locals. Cremorne Point Manor has been a guesthouse for about 50 years".

All content from Kiddle encyclopedia articles (including the article images and facts) can be freely used under Attribution-ShareAlike license, unless stated otherwise. Cite this article:
Cremorne Point Manor Facts for Kids. Kiddle Encyclopedia.