The Crest Theatre is a historic theatre located in downtown Sacramento, California.

It originally opened in 1912 as the Empress Theatre, and at that time was used as a vaudeville palace. It later became the Hippodrome. On September 14, 1946 the Hippodrome's marquee suddenly fell to the pavement below, killing a bystander, Mrs. Jessie Shirley Potter, 41, of Alta, who was crushed beneath the marquee. Joseph Brady, 40, was struck a glancing blow and sustained a skull fracture, broken collarbone, permanent brain injury and loss of hearing in one ear. Damages of $176,334.50 were sought by Potter's family and by Brady in superior court.

Shortly after the tragedy, in 1949, the building was completely remodeled and revamped to its current form as the Crest Theatre. During the 1950s and 1960s, it was one of the premier first-run movie palaces in the Sacramento area. As the decade turned to the 1970s, it was reduced to mostly sub-run fare. In the early 1980s, the Crest closed down for a time while several attempts were made to revive the theatre in many forms, including a dinner theatre. Finally, by the end of 1995, the Crest was completely refurbished and today its main auditorium (which has been left in its post-1946 unaltered state) is a multi-purpose theatre showing classic revival and specialty films, occasional live shows and lectures. Two additional, smaller cinemas were built adjacent to the original site around the time of the remodeling. The two subterranean theaters were closed in the 2010s and replaced by Empress Tavern in 2015. 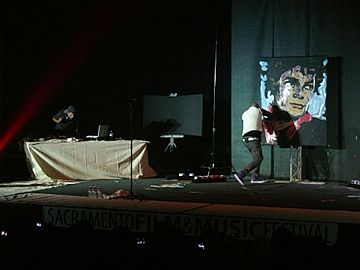 The Sacramento French Film Festival, founded in 2001, is an annual event held in July at the Crest Theatre. It celebrates the present as well as the rich history of French cinema featuring new releases and rarely seen classics. It is the only festival dedicated to French cinema in Northern California and one of only two on the West coast.

This is a film festival that takes place annually at the Crest. It is now in its 10th year. The two co founders are Margi Park-Landau and Sid Heberger, the manager of the Crest. Park-Landau wanted to create a place closer to Sacramento where Jewish films could be shown. All the films shown at the film festival relate to the Jewish experience in one way or another. Guest speakers, live music, and a nosh are all part of this two-day event.

The Sacramento Film and Music Festival is an international submission-based film festival combined with local programs for both filmmakers and musicians. In 2008, the festival expanded to ten days with all programs hosted at the Crest Theatre. For its 12th year, in 2011, the festival has divided into two seasonal events: WinterFEST in January and SummerFEST in August, with both events continuing to include all genres and lengths of film.

All content from Kiddle encyclopedia articles (including the article images and facts) can be freely used under Attribution-ShareAlike license, unless stated otherwise. Cite this article:
Crest Theatre Facts for Kids. Kiddle Encyclopedia.