Kids Encyclopedia Facts
Not to be confused with Crook Hall near Consett, County Durham. 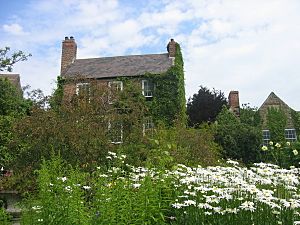 Crook Hall is a 14th-century Grade I listed manor house which stands off Sidegate in the Framwelgate area of the city of Durham.

Built in sandstone with a Welsh slate roof, the oldest part dates from the 14th century. At one end is a 17th-century extension to which an 18th-century additional extension is attached, comprising 11 bays in all. It is surrounded by English country style gardens.

The Manor of Sydgate was granted in 1217 to Aimery, son of the then Archdeacon of Durham, from whose family it passed to Peter del Croke, after whom it is named. From him it passed to the Billingham family, who occupied the hall for some 300 years. In 1657 it passed to the Mickletons until it was bought in 1736 by the Hoppers of Shincliffe. Since then there have been a succession of different owners until it was bought in a semi-derelict condition by the Cassels in 1928.

The building is reputedly haunted by the "White Lady" and is open to the public throughout most of the year.

All content from Kiddle encyclopedia articles (including the article images and facts) can be freely used under Attribution-ShareAlike license, unless stated otherwise. Cite this article:
Crook Hall, Durham Facts for Kids. Kiddle Encyclopedia.