Croton Gorge Park is a park in Cortlandt, New York owned and operated by Westchester County. It consists of 97 acres (39 ha) at the base of New Croton Dam. The park is a popular venue for fishing, picnicking, sledding and cross country skiing. The Old Croton Trail begins in the park, which also includes a baseball field and an impressive fountain occasionally operated with high pressure water from the reservoir. The fountain was reopened in 2000 after having been out of service since the mid twentieth century.

The road over the top of the dam is one of four arteries for crossing the Croton River (only three of the bridges connect to public roads at both ends). Following the September 11 attacks in 2001, this road has been closed to non-emergency vehicles as a security precaution, though it remains open to pedestrians and bicycles. Previously, school buses had used the road as the best route available. 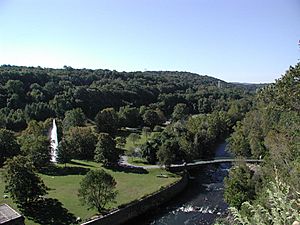 Park with fountain as seen from the dam 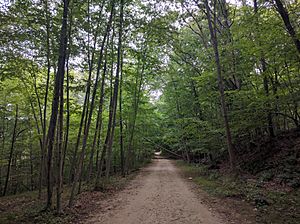 one of the trails to the top of the dam 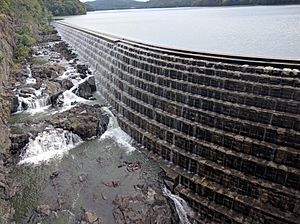 view from the dam

All content from Kiddle encyclopedia articles (including the article images and facts) can be freely used under Attribution-ShareAlike license, unless stated otherwise. Cite this article:
Croton Gorge Park Facts for Kids. Kiddle Encyclopedia.