The New Croton Dam (also known as Cornell Dam) is a dam forming the New Croton Reservoir, both parts of the New York City water supply system. It stretches across the Croton River near Croton-on-Hudson, New York, about 22 miles (35 km) north of New York City. 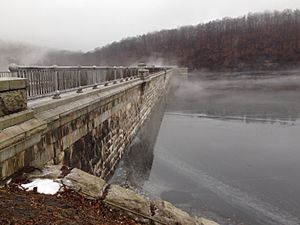 The dam on the reservoir side

The original Croton Dam (Old Croton Dam) was built between 1837 and 1842 to improve New York City's water supply. By 1881, after extensive repairs to the dam, which was 50 feet (15 m) high, Old Croton Reservoir was able to supply about 90 million US gallons (340,000 m3) a day to the city via the Old Croton Aqueduct. To meet escalating water needs, the Aqueduct Commission of the City of New York ordered construction of a new Croton system in 1885. Hydro engineer James B. Francis was brought in as a consultant for the construction.

The proposed dam and reservoir were to cover 20 square miles (52 km2) of land occupied by public and private buildings, six cemeteries, and more than 400 farms. Condemnation disputes led to "protests, lawsuits, and confusion" before payment of claims and the awarding of construction contracts. The work force on the new dam included stonemasons and laborers who had worked on the original dam. John B. Goldsborough, superintendent of excavations and hiring for the project, also recruited stonemasons from southern Italy, who re-located to New York.

Building the dam meant diverting the river from its normal path and pumping the riverbed dry. To accomplish this, workers dug a crescent-shaped canal 1,000 feet (300 m) long and 200 feet (61 m) wide in the hill on the north side of the river, secured the canal with a masonry retaining wall, and built temporary dams to control the water flow. The initial construction lasted eight years, and extensive modifications and repairs went on for another six. Working conditions were often difficult. A silent film, The Croton Dam Strike, released in 1900, depicted labor–management problems related to the dam's construction. 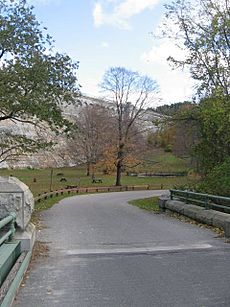 Work began in 1892 at a site on the property of A.B. Cornell 4 miles (6.4 km) downstream of the original dam, which was submerged by the new reservoir. New Croton Reservoir was eventually able to supply 200 to 300 million US gallons (760,000 to 1,140,000 m3) a day via a new aqueduct that carried water to Jerome Park Reservoir in the north Bronx, New York City.

The bridge over the spillway was replaced in 1975 and again in 2005. In that same year, because of the September 11 attacks on New York City, the New York City Department of Environmental Protection proposed permanent closure of the road across the top of the dam. Pedestrians and emergency vehicles were allowed to use New Croton Dam Road, but all other traffic was re-routed. The department made plans to replace temporary vehicle barriers with permanent barriers after completion of a New Croton Dam Rehabilitation Project in 2011.

Croton Gorge Park offers views of the dam from directly downstream. The Old Croton Trail, a popular hiking and biking path that roughly follows the route of the Old Croton Aqueduct, has an endpoint near the base of the dam. Teatown Lake Reservation, a nature preserve, lies nearby as does Croton Point Park in Croton-on-Hudson.

All content from Kiddle encyclopedia articles (including the article images and facts) can be freely used under Attribution-ShareAlike license, unless stated otherwise. Cite this article:
New Croton Dam Facts for Kids. Kiddle Encyclopedia.