The Crow Museum of Asian Art is a museum in downtown Dallas, Texas, dedicated to celebrating the arts and cultures of Asia including China, Japan, India, Korea, Nepal, Vietnam, Cambodia, Thailand, Indonesia, Myanmar and the Philippines, from ancient to the contemporary. The Crow Museum opened to the public on December 5, 1998, as a gift to the people and visitors of Dallas from Mr. and Mrs. Trammell Crow. The museum is a member of the Dallas Arts District. The interior was designed by Booziotis and Company Architects of Dallas.

Trammell and Margaret Crow bought their first piece of Asian art in the mid-1960s. The Crows have traveled extensively throughout the world, but Asia was a favorite destination. Pieces from Southeast Asian countries such as China, Japan, and India were added as the Crows' travels continued, evolving into a distinguished collection featuring artwork spanning 3500 B.C. to the early 20th century.

The idea for the museum came about when Mr. and Mrs. Crow decided they would like to keep the collection intact as a legacy for their children and grandchildren, and the general public. The artwork, which ranges from including examples of Chinese jades, Buddhist sculpture, and Japanese screen paintings, had been displayed in lobbies, reception, and office areas of the Trammell Crow Center, other office buildings, marts, hotels, and in the homes of the Crows and their children prior to the formation of a museum. "Because the art was scattered between commercial buildings and our families' homes, we had little notion of what kind of a collection we had until pieces were gathered for the exhaustive selection process," Mrs. Crow said.

In total, the Crow family has amassed more than 4,000 pieces of Asian art, among which the 569 best were selected, after extensive analysis, by a noted curator for inclusion in The Crow Collection. At that point, the interior of the Pavilion at the Trammell Crow Center was redesigned and renovated to meet the special needs of a gallery displaying centuries-old art year-round. A son of the family, Trammell S. Crow, serves as president of the Crow Family Foundation and oversees the development of The Crow Collection.

The Crow Museum was partially closed for the majority of 2018 as it underwent renovations and an expansion. After years of thoughtful planning and development, the museum dramatically expanded its footprint along the southwest corner of Harwood and Flora Streets in the Dallas Arts District. Oglesby Greene Architects of Dallas, which handled earlier renovations of the museum, led the expansion project. The Beck Group was the general contractor. In September 2018, the Crow Collection changed their name to the Crow Museum of Asian Art, a name that reflects not only the breadth of the collection and programming but also the museum's wide and diverse community support.

Additionally, the Crow Museum formally launched the Center for Contemplative Leadership with programming focused around The Charter for Compassion. Coupled with mindfulness-based art education programming in the museum, this initiative promotes increases awareness, productivity, and compassion for self and others through classes and workshops that explore mindfulness.

It was announced in January 2019 that the University of Texas at Dallas would acquire the Museum. The deal includes establishment of a second Crow Museum location at the UT-Dallas campus in Richardson.

The Seated Daoist Deity fountain at the Crow Collection

The majority of works comprising the Trammell and Margaret Crow collection have been obtained from individual purchases through private dealers and auction houses, as well as through the acquisition of major collections, such as the highly respected Morrie A. Moss collection. The Crow Museum of Asian Art has three galleries.

Gallery I, located on the first floor, is where Japanese art is exhibited, except when travelling exhibitions are on display. The Lotus Shop and garden flank Gallery I. Gallery II occupies the second floor. Chinese artifacts are displayed in Gallery II, as well as in the mezzanine. The jade collection, one of the finest in the US and a pillar of the Crow Collection, is located here. Most of the items are from the 18th century, when the traditional Chinese jade industry (before the arrival of the industrial age) reached its zenith. A number of Qing Dynasty snuff bottles are on display as well.

The Skybridge, a glass structure held up by steel beams connecting Gallery II and Gallery III, offers views of the Nasher Sculpture Center, the Trammell Crow Center, and overlooks The Seated Daoist Deity fountain. Gallery III is the primary site for works of art from Southeast Asia and India. Gallery III is dominated by the Mugal wall, which is hung from the ceiling due to its extreme weight, and two Indian gazebos. One of these "baradari," used in gardens of Indian palaces and residences for relaxation and meditation, spent years at the Crow family farm in East Texas before its selection for the collection. 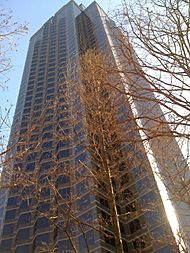 Located in the Dallas Central Business District, the Trammell Crow Center stands at a height of 686 feet (209 m) and is the sixth-tallest building in Dallas and the 18th-tallest in Texas. The building totals 1,200,000 square feet (110,000 m2) on 50 floors and has a polished and flamed granite exterior with a garden plaza and is bordered by the Crow Collection. There are many museums available in close proximity to the building: the Nasher Sculpture Center, the Winspear Opera House, and the Dallas Museum of Art.

All content from Kiddle encyclopedia articles (including the article images and facts) can be freely used under Attribution-ShareAlike license, unless stated otherwise. Cite this article:
Crow Museum of Asian Art Facts for Kids. Kiddle Encyclopedia.