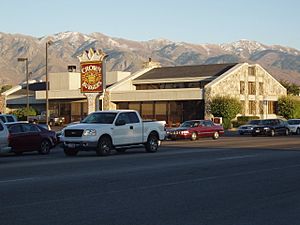 The chain is known for its signature burger, the "Crown Burger," a cheeseburger which also includes hot pastrami. Crown Burgers' pastrami cheeseburger has been widely imitated and has become a staple of restaurant cuisine in Salt Lake City, with seven locations. Crown Burgers also carries its own version of the regional condiment fry sauce, a combination of ketchup, mayonnaise and spices.

In 2010, Crown was featured in an episode of Travel Channel's Man v. Food, and was named as serving The Official Best Burgers of Utah in 2011.

Crown Burgers is such a fixture in the Salt Lake Valley that in the London production of The Book of Mormon musical, the Crown Burgers logo can be seen on the backdrop for Salt Lake City stage scenes.

All content from Kiddle encyclopedia articles (including the article images and facts) can be freely used under Attribution-ShareAlike license, unless stated otherwise. Cite this article:
Crown Burgers Facts for Kids. Kiddle Encyclopedia.