The Cube Microplex is a social art experiment existing in the form of a cinema and event venue in central Bristol. It operates as a non-profit cooperative. Since opening in 1998 it has hosted artistic and cultural events including films and music performances as well as providing a focal point for the local artistic community. The building includes a 108-seat theatre/cinema as well as a bar serving local and ethical products. All participants provide their involvement in the project voluntarily and are unwaged. 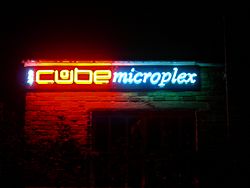 The wooden theatre at the heart of the Cube was adapted from a workshop by volunteers for an Amateur Dramatics group in 1964. The building itself has a long history as a community arts venue, built in 1916 as workshops for the Bristol Deaf Centre; and converted by a team of amateur theatre enthusiasts in 1964 into a theatre with 108-seat auditorium and fly tower. A projection room and cinema screen were added in the 1970s.

The Cube opened its doors in its present form in October 1998 after about a six-month lead in period during which funding, equipment, business contracts and business plan were worked on. The team of four who started the Cube consisted of film maker/writer Jack Davies, screenwriter and film festival activist Julian Holman, and two stilt-walkers: Kevin Dennis and Graeme Hogg. Hogg (known as Hogge) and Dennis had been running an underground (as in mostly illegal and unlicensed) film screening event called Club Rombus for two years and this experience provided the foundation of what the Cube was to become. After acquiring a lease to the building, this small group managed to organise and recruit further volunteers.

In July 2001 a serious fire originating in the New Mayflower kitchen destroyed most of the internal storeys and timber of 4 and 5 King Square and although the Cube itself only sustained minor odour and smoke stain damage, its entranceway was effectively destroyed meaning it was cut off from use by the general public.

After extensive rebuilding work, the Cube re-opened in August 2002.

In December 2013, a fund-raising project to buy the freehold of the Cube's building was successful in reaching its £185,000 target.

On April 1, 2014 the Cube official became owned by Microplex Holdings Ltd, a non-profit Industrial and Provident Society and Community Land Trust (CLT) set up by Cube volunteers whose charter is to secure and maintain the freehold of the Cube Cinema as a community arts space in perpetuity. 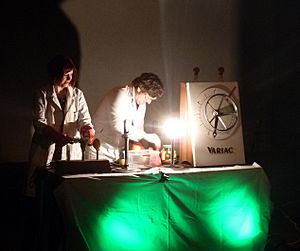 Science Cabaret at the Cube

The Cube's public programme averages over 350 events per year, with a monthly average attendance of 1500. While its programme strategy includes screening films on theatrical release, the programme as a whole takes the notion of 'Cinema' as something to experiment with, remix and expand into other art forms, an approach that has given it an international standing. The Cube aims to reflect in its repertoire the diversity of both its members and its volunteer culture. Along with its cinema, music, performance and education programmes, the Cube hosts a wide range of local and international artists and community-initiated events. The film screenings include general and limited release mainstream films, art-house, cult films and work by local film makers. It offers special film screenings for mothers and babies. Regular nights have included Hellfire Video Club double bills of top-grade psychotropic celluloid on the big screen, The Standup Picture Show's regular mix of live stand up and a classic or cult comedy film, and a movieoke evening, in which audience members act out their chosen film scenes on stage as they are played on the big screen. Weekends often feature live music and performances. The building is also periodically hired to third parties to put on their own events. The Cube has played hosts to seasons and festivals, including the Venn Festival, Ladyfest Bristol, Bristol Radical History Group, Ausform Platform of Performance and Independent Heroine festivals.

Its anti-corporate ethos led to projects such as Kate Rich and Kayle Brandon's Cube-Cola, based on an open source cola recipe, and Feral Trade which supplies various products to its bar using only personal social networks, including fair trade coffee from a farming cooperative in El Salvador. It has its own in-house improvising orchestra, the Orchestra Cube.

The Cube has a history of setting up temporary cinemas in exotic locations, including a tin mine in Cornwall. In March 2010, a group travelled to the aftermath of the Haiti earthquake to stage an open-air cinema showing mainstream and specially-created films to children, and in 2015 to Nepal following the April 2015 Nepal earthquake.

The Cube Cinema was incorporated in 1998 as a company limited by guarantee, constituted as a democratically run worker's co-operative. Due to its open volunteering policy, it is essentially programmed and managed by its audience. Cube workers range in age from 8 to 65 and are artists, filmmakers, musicians, computer technicians, students, nurses, teachers, adults with special needs, temps, mechanics, retirees and children. Some have worked at the Cube for several months, others for more than a decade. For many volunteers, the Cube has been their first opportunity to participate in the arts in depth; for others it provides a platform from which to incubate and produce diverse art projects.

All content from Kiddle encyclopedia articles (including the article images and facts) can be freely used under Attribution-ShareAlike license, unless stated otherwise. Cite this article:
Cube Microplex Facts for Kids. Kiddle Encyclopedia.