The Santa Cruz cypress (Hesperocyparis abramsiana; formerly classified as Cupressus abramsiana) is a species of North American tree within the Cypress family. The species is endemic to the Santa Cruz Mountains within the Santa Cruz and San Mateo counties of west-central California. The U.S. Fish and Wildlife Service listed the species on the Endangered Species Act in 1987 due to increasing threats from habitat loss and disruption of natural forest fire regimes. In 2016, the conservation status of the Santa Cruz cypress changed to Threatened. The cited reasoning was a decrease in threats against their habitat. 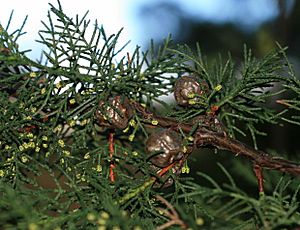 Close up of leaves as well as seed cones and pollen cones.

Individuals can grow 10 to 25 meters tall with branches 5-10cm in diameter covering the trunk to nearly the ground. The shape of the tree is pyramidal, with branches longer toward the base. The tree’s leaves are light green and scale-like and can grow up to 15mm in length, persisting on branches for many years. The bark of the trunk is fibrous with thin grey vertical stripes. Individuals begin to produce cones at 11 years in age. Pollen cones can grow up to 4mm long and produce large amounts of pollen that spread in the wind. Female seed cones are produced annually on the tree and grow up to 20 to 30mm in diameter. They remain on the tree until the supporting branches die, typically as a result of natural fires. Individuals can live beyond 100 years, with one of the oldest individuals identified as being between 127 and 162 years old. 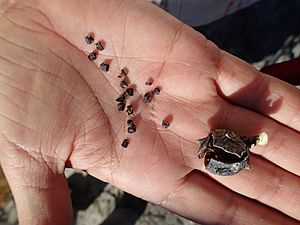 The reproductive age of the Santa Cruz cypress is on average 11 years of age. Seed viability falls to 10 percent by the time a tree is 30 years old. Like some other coniferous trees, the seed-bearing cones of the Santa Cruz cypress depend on fire to heat open the cone and release the seeds. The fires burn the vegetation in the area, including the parent tree. The seeds of the cypress are then able to germinate without the competition of other plants in the area. 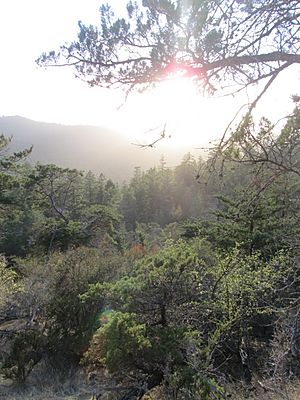 The habitat of the Santa Cruz cypress consists of the chaparral and closed-cone pine forest communities in the Santa Cruz Mountains. The habitat ranges from 300 to 750m in elevation, consisting of poorly developed sandstone or granitic soils. The climate of this area produces cool, wet winters and hot, dry summers, and natural fire regimes periodically destroy the vegetation in the area. The Santa Cruz cypress have evolved to be dependent on these fires for reproduction. The trees are obligate seeders, meaning they do not regenerate after burning up in a fire. Instead, the seeds germinate after the fire to minimal competition. They are then able to regenerate and grow the population. If fires are too frequent, seedlings will not be able to reach reproductive age. If fires are too infrequent, the trees do not reproduce often enough to maintain population size.

This species grows only in a 16km2 (6.2mi2 or 356 acres) stretch of land in California. Within this range are five different localities with stands of the trees. The range covers parts of the Santa Cruz Mountains and the Santa Cruz and San Mateo counties. Historically, the populations had a much larger range, covering at least 76km2 (30mi2 or 19,200 acres). The estimated total population is less than 300 individuals, but abundance varies between localities. Some stands of the cypress only have a few individuals left.

The International Union for the Conservation of Nature (IUCN) added the Santa Cruz cypress to the Red List in 1998 as endangered. In 2011, the IUCN updated the listing to critically endangered.

The U.S. Fish and Wildlife Service added the Santa Cruz cypress to the United States' Endangered Species Act (ESA) in 1987, listing it as endangered. In 2009, a 5-year review recommended the status lower from endangered to threatened. Following petitions from local cattle and agricultural organizations and reconsideration of the review, the U.S. Fish and Wildlife Service reclassified the tree as threatened in 2015.

The modern habitat of the Santa Cruz cypress no longer experiences fires at its natural frequency. Without disturbances like fire, the trees undergo little population growth and decreasing reproduction. Existing trees become post-reproductive and no longer produce viable seeds. Human-created fires can occur too often, destroying immature trees before reaching reproductive age. The U.S. Fishing and Wildlife Service cited the altered fire regime as one of the most important threats to the populations.

Nonnative species serve as competition and habitat modifiers that can limit cypress success. Acacia dealbata and Genista monspessulana impact Santa Cruz populations by blocking sunlight and by competing for soil space to germinate. More nonnative invasions are possible in the future due to the cypress’ closeness to residential areas. The foot travel and human activities in these areas can bring more invasive species.

Another major human-derived threat to the species is climate change. Rising temperatures may push populations northwards, as well as further alter the fire regime. The species is also damaged by vandalism and unauthorized recreational activities. Actions like carving into bark damage the trees, encouraging infections and disease. In the past, the conversion of habitat into agricultural lands and residential areas was a major threat. But as populations became protected and preserved, the threat has since decreased.

The U.S. Fish and Wildlife Service released the first recovery plan for the Santa Cruz cypress in 1998. In 2009, the updated recovery plan recommended the reclassification of the species to threatened when protection for all five populations and their habitat is secured. The listed primary threats to control are logging, agricultural conversion, and development. The U.S. Fish and Wildlife Service lists all 356 acres of habitat as a necessary/critical habitat in conserving the species. The plan also recommends delisting the species if all five populations experience long-term reproductive success. They provide insurance against failure by the availability of stored seeds. The plan also classified the Recovery Priority Number to a 6. This is the lowest priority and represents a species with low impact on human activities.

Updated resource-use plans and ordinances from the Santa Cruz and San Mateo counties currently protect some populations. More than half of all the individuals in the species occur on private lands owned by conservationists. State and county parks protect the remaining individuals. Watershed management plans have begun for some of these areas to aid in protections.

All content from Kiddle encyclopedia articles (including the article images and facts) can be freely used under Attribution-ShareAlike license, unless stated otherwise. Cite this article:
Cupressus abramsiana Facts for Kids. Kiddle Encyclopedia.