Kids Encyclopedia Facts
This page is about the Melbourne park. For the bird genus, see Currawong.

Currawong Bush Park is an important riparian bushland park, located in the outer eastern suburbs of Melbourne on the borders of Doncaster East, Warrandyte and Donvale, on the eastern bank of the Mullum Mullum Creek. The park is important for a number of reasons, it comprises 59 hectares of remnant bushland and hosts many archaeological sites concerning the pre-European inhabitants of the area.

The major threats to the park's ecology are introduced species of flora and fauna such as foxes, rabbits, dogs and cats. It is a popular destination for school and community groups and is frequented by local bush walkers. It once housed a group of kangaroos in its wildlife enclosure, however due to funding cuts, the park can no longer be managed full-time by a park ranger and the enclosure was closed.

An archaeological survey of aboriginal sites within City of Manningham by Ellender in 1991, discovered evidence of the presence of the Wurundjeri people in the park, in the form of four scarred trees. Scarred trees are trees from which bark or heartwood has been removed to make a wooden artefact such as a shield, canoe or container. An aboriginal stone artefact was also found along the Mullum Mullum Creek. The Wurundjeri were part of the Kulin nation, comprising the main tribes living within about a 150 km radius of Melbourne. The Wurundjeri are of the Woiworung tribe, one of five Kulin tribes, each of whom had their own land and language.

More recent history shows the building housing the Ranger's Residence, Park Office and Conference Room as a building of State historical significance. It is a fine example of the innovative and influential design work of the distinguished Victorian architect Geoffrey Trewenack. It has sometimes mistakenly been attributed to the Victorian Architect, Kevin Borland. The house was built by Robin and Bunty Elder, in 1959. They resided there until approx 1969, when the property was acquired as a public park.

Currently, the park has no on-site manager or ranger. Previously a full-time ranger was employed by the City of Manningham through an environmental group until funding was cut around 2004. According to the Currawong Bush Park management plan in 2003, $1–2 million would be enough to upgrade facilities and deal with threats to the park's ecology, three staff are required to operate and manage the park properly. 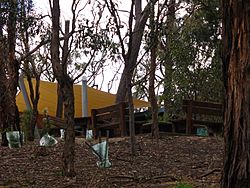 Regenerative planting near the education centre and camping site 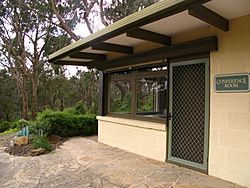 The park is a rare example of the native ecology of the area prior to European settlement. Many native species of flora and fauna can be found in the park including many species of eucalypts such as the Manna Gum and kangaroos such as the Eastern Grey.

Being surrounded by low-density residential development, some of the most urgent problems the park faces stem from introduced species such as rabbits, foxes, stray dogs and cats, occupying the park. Stray dogs mutilate Eastern Grey kangaroos and any young they may be carrying, rabbits dig furrows in the soil and entice foxes into the park who compete with stray dogs for territory. Stray cats hunt native bird life and possums. Various weeds from neighbouring properties flow down watercourses into the gullies, this can be seen occurring in Go-betweens Gully.

Threats from humans include disturbance of plant and animal life from motorbikes and bicycles, and light pollution from the neighbouring hockey field in the southern area of the park. The combined effect of the light pollution and traffic noise and pollution from Reynolds Road, drives wildlife away from the southern slopes and into other areas of the park where they compete with other species for already limited space.

The entire park is a no dog zone. Not even dogs on leads can enter the park. Motorised transport including motorbikes, scooters and trail bikes, is strictly limited to the roadway and carparks. Cyclists may ride on fire access tracks, but must dismount prior to entering smaller, unsealed walking tracks. The park is particularly susceptible to bushfires and being so close to residential areas, the fire danger in the area is very real. Fire should only be used in the campfire site near the Education Centre, there are electric barbecues for cooking. There is no camping in the park.

All content from Kiddle encyclopedia articles (including the article images and facts) can be freely used under Attribution-ShareAlike license, unless stated otherwise. Cite this article:
Currawong Bush Park Facts for Kids. Kiddle Encyclopedia.