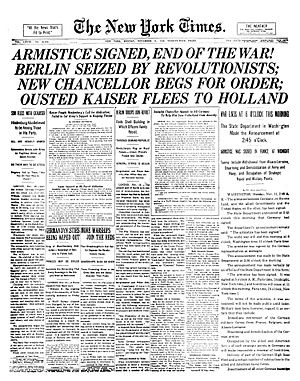 A newspaper is one of the most common ways to receive the latest news.

News is when people talk about current events (things that are happening right now). News can be given in newspapers, television, magazines, or radio. There are several news channels on cable television that give news all day long, such as Fox News and CNN. There are several news magazines, such as Time, The Economist, and Newsweek. A newsman is a person who helps out with the news. For example, Brian Gotter is a newsman.

All content from Kiddle encyclopedia articles (including the article images and facts) can be freely used under Attribution-ShareAlike license, unless stated otherwise. Cite this article:
News Facts for Kids. Kiddle Encyclopedia.