The Cyclorama Building is an 1884 building in the South End of Boston, Massachusetts that is operated by the Boston Center for the Arts.

The Classical Revival style Victorian building was commissioned by Charles F. Willoughby's Boston Cyclorama Company to house the Cyclorama of the Battle of Gettysburg, a 400-by-50 foot cyclorama painting of the Battle of Gettysburg. It was designed by Charles Amos Cummings and Willard T. Sears. The central space is a 127'-diameter steel-trussed dome which, when it was built, was the largest dome in the country after the United States Capitol building. Visitors entered through the crenelated archway, proceeded along a dark winding passage, and then ascended a winding staircase to an elevated viewing platform. Skylights lit the scene by day, and it was illuminated by a system of 25 arc lamps by night.

In 1889, a new cyclorama painting Custer's Last Fight, was installed, but by 1890, the fashion for cycloramas had ended, and the new owner of the building, John Gardner (father-in-law of Isabella Stewart Gardner), converted it to a venue for popular entertainment, including a carousel, roller skating, boxing tournaments (including an 1894 fight of John L. Sullivan), horseback riding, bicycling, and so on.

By 1899, it had become an industrial space, used by the New England Electric Vehicle Company, the Tremont Garage, the Buick Automobile Agency, and Albert Champion Company. Albert Champion is said to have invented the spark plug here before he moved to Flint, Michigan.

Boston Center for the Arts

The Boston Redevelopment Authority designated the Boston Center for the Arts as the developer for the Cyclorama and the surrounding buildings in 1970.

The Cyclorama was added to the National Register of Historic Places in 1973.

Another, competing cyclorama building was built two blocks from the first, and displayed a cyclorama of The Battle of Bunker Hill. 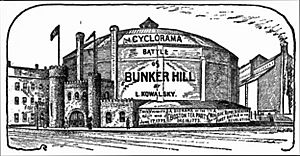 All content from Kiddle encyclopedia articles (including the article images and facts) can be freely used under Attribution-ShareAlike license, unless stated otherwise. Cite this article:
Cyclorama Building Facts for Kids. Kiddle Encyclopedia.