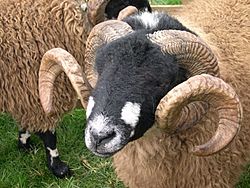 Dalesbreds have a distinctive white spot on either side of the muzzle, and the rams have large curling horns.

Very similar in appearance to its parent breeds, both rams and ewes have distinctive horns and a white carpet-quality fleece. Scurs are absent in the breed. It can be best distinguished by having a white spot on each side of its black face, with the end of the muzzle becoming grey. This breed is primarily used for meat and wool production. The legs are free of wool and are mottled black and white. Dalesbred ewes weigh 45 to 60 kg (99 to 132 lb) and rams 55 to 75 kg (121 to 165 lb).

Dalesbred are a hardy breed capable of surviving the harsh conditions of upland terrain. They are generally bred for several generations in this environment, then ewes are sold to lowland farmers for cross breeding to produce mules. Ewes are often crossed with Teeswater rams to produce the Masham which is one of the most famous of British crossbreeds.

Due to the location and small extent of its distribution, this breed was threatened during the foot-and-mouth disease epidemic in 2001. It is still considered at risk due to its distribution.

All content from Kiddle encyclopedia articles (including the article images and facts) can be freely used under Attribution-ShareAlike license, unless stated otherwise. Cite this article:
Dalesbred Facts for Kids. Kiddle Encyclopedia.