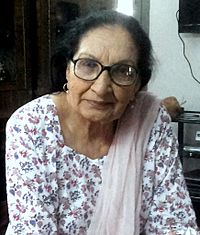 Dalip Kaur Tiwana (4 May 1935 – 31 January 2020) was an Indian novelist and short-story writer. She wrote about contemporary Punjabi literature. She won awards, both regional and national, and was a widely translated author.

In 1963, she joined the Punjabi University, Patiala as a Lecturer and then went on to become Professor and Head of the Department of Punjabi, and Dean, Faculty of Languages. She was also a UGC National Lecturer for a year.

All content from Kiddle encyclopedia articles (including the article images and facts) can be freely used under Attribution-ShareAlike license, unless stated otherwise. Cite this article:
Dalip Kaur Tiwana Facts for Kids. Kiddle Encyclopedia.