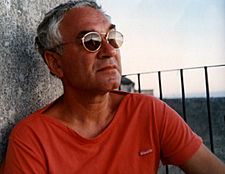 Dan Tsalka was born in 1936 in Warsaw. In World War II his family fled to the Soviet Union, where they lived in Siberia and then Kazakhstan. At the close of the war, when he was ten, he returned with his family to Poland, to the city of Wrocław. He studied humanities at the city's university, engaging in boxing, an activity that appeared later in the novel Gloves.

In 1957 he immigrated to Israel in the "Gomułka Aliyah". He changed his name from Mietek to Dan, a name his sister suggested during their stay in a transit camp (maabara) in Yavne. After studying Hebrew at Kibbutz Hatzor, he enlisted in the Israel Defense Forces and served in the armored corps. After his discharge he studied philosophy and history at Tel-Aviv University. He continued his studies in France, also residing for a time in the Netherlands, the United Kingdom, and Italy.

In 1967 he published his first novel Dr. Barkel. He was the editor of Masa, the literary supplement of the newspaper Lemerkhav, and engaged in additional editing and translation.

In 2000 he made a trip to Morocco with a friend, as he described in the book Morocco: Travel Notes.

He won many Israeli literature awards, including:

All content from Kiddle encyclopedia articles (including the article images and facts) can be freely used under Attribution-ShareAlike license, unless stated otherwise. Cite this article:
Dan Tsalka Facts for Kids. Kiddle Encyclopedia.