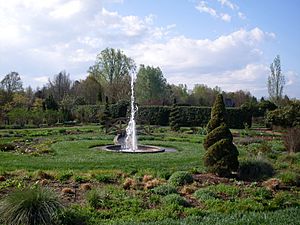 The appealing garden site has a long history of use by its inhabitants. Originally, Native Americans of the Catawba and Cherokee tribes trapped, fished, hunted and raised families here. Later, the area served as home to early European settlers. In recent years, the garden’s meadowlands have been used as pasture for farm animals, although much of the site is covered by mature deciduous woodlands and pine forest.

Although a relatively new facility, Daniel Stowe Botanical Garden has a very old historical connection. The French botanist André Michaux rode and walked across the garden property in 1795. Michaux found new plants in Gaston County not far from the current garden, including the Bigleaf Magnolia. 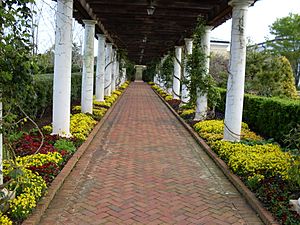 Development of the master plan will occur over the next several decades. Future plans for the garden include a home demonstration garden, a boat water entrance with lakeside visitor center, a children's garden, a rose garden, a restaurant, and an Asian garden.

The Orchid Conservatory is the region’s only public conservatory devoted to the display of tropical plants. Opened in January 2008, it features a wide range of plants that enable guests to learn about tropical ecosystems around the world. Year-round the display will include a selection of orchids. Each winter, the garden presents its Orchid Spectacular.

The orchid conservatory makes the garden a true year-round facility, to serve not only the general public but schoolchildren around the region. Educational topics vary by the season and by the age group, but most focus on either horticulture and gardening or some aspect of life science or conservation. The series of curriculum-based school programs, specifically designed for kindergarten to fifth-grade levels, meet goals established by the North Carolina Standard Course of Study. The garden also offers year-round special events and classes ranging from gardening and landscape to pottery and cooking with herbs.

All content from Kiddle encyclopedia articles (including the article images and facts) can be freely used under Attribution-ShareAlike license, unless stated otherwise. Cite this article:
Daniel Stowe Botanical Garden Facts for Kids. Kiddle Encyclopedia.