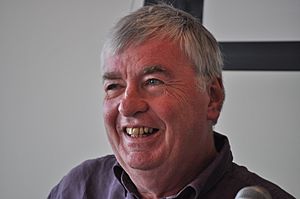 David William "Dave" Laing (1947 – 7 January 2019) was an English writer, editor, and broadcaster. Laing was editor of the monthly British music magazine Let It Rock from October 1972 to October 1973.

He co-authored, with Phil Hardy, The Faber Companion to 20th Century Popular Music (1995), and co-wrote, with Sarah Davis, The Guerrilla Guide to the Music Business (2001). He is also an editor of the Continuum Encyclopedia of Popular Music of the World.

Laing also worked for The Guardian during his final years.

All content from Kiddle encyclopedia articles (including the article images and facts) can be freely used under Attribution-ShareAlike license, unless stated otherwise. Cite this article:
Dave Laing Facts for Kids. Kiddle Encyclopedia.