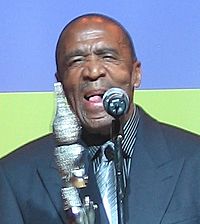 David Nthubu Koloane (5 June 1938 – 30 June 2019) was a South African artist and political writer. In his drawings, paintings and collages they are about the actual questions of political injustice and human rights. Koloane was called "an influential artist and writer of the apartheid years" in South Africa by The New York Times. He was born in Alexandra, South Africa.

Koloane's works are part of many collections worldwide, including the collections of the Johannesburg Art Gallery, The Contemporary African Art Collection (CAAC) of Jean Pigozzi, the South African National Gallery in Cape Town and the Botswana National Museum.

In 2015, Koloane was honoured by Rhodes University with an honorary degree.

All content from Kiddle encyclopedia articles (including the article images and facts) can be freely used under Attribution-ShareAlike license, unless stated otherwise. Cite this article:
David Koloane Facts for Kids. Kiddle Encyclopedia.