David was born in Tbilisi, Georgia. Koma has a younger brother and sister. His parents live in Saint Petersburg, Russia.

David Koma discovered his penchant for drawing and dress design at the young age of eight. To pursue his interests, David studied Fine Art in Saint Petersburg, taking part in design competitions from age 13 and showing his first collection at the age of 15.

In 2003 David moved to London to take up a place at the prestigious Central Saint Martins College of Art and Design. After completing his BA in Fashion Design, David graduated with a distinction in MA Fashion in April 2009 under the mentorship of Professor Louise Wilson, OBE, winning Harrods Design Award at the Graduate Fashion Week. 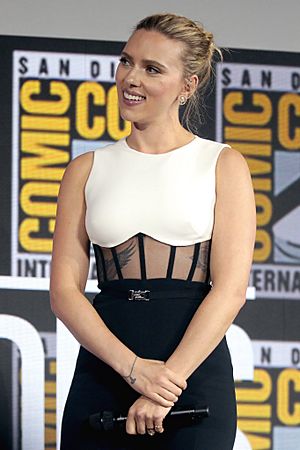 Straight after graduation David Koma launched his eponymous ready-to-wear brand and has been a participant of London Fashion Week ever since. Over the years, the brand has received numerous prizes including Vauxhall Fashion Scout in 2009, NEWGEN sponsorship in 2010 and Fashion Forward in 2013. In 2018 and 2019, David Koma was shortlisted for the British Fashion Council / Vogue Fashion Fund.

From December 2013 until December 2017 David held the position of creative director at Mugler.

All content from Kiddle encyclopedia articles (including the article images and facts) can be freely used under Attribution-ShareAlike license, unless stated otherwise. Cite this article:
David Koma Facts for Kids. Kiddle Encyclopedia.