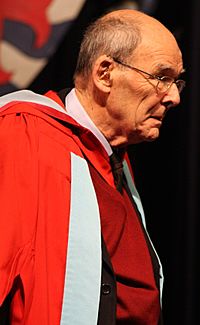 David Malet Armstrong (8 July 1926 – 13 May 2014), often D. M. Armstrong, was an Australian philosopher. He is well known for his work on metaphysics and the philosophy of mind, and for his defence of a factualist ontology. He was elected a Foreign Honorary Member of the American Academy of Arts and Sciences in 2008.

All content from Kiddle encyclopedia articles (including the article images and facts) can be freely used under Attribution-ShareAlike license, unless stated otherwise. Cite this article:
David Malet Armstrong Facts for Kids. Kiddle Encyclopedia.