Kids Encyclopedia Facts
This page is about the writer. For the fictional character named David Shore, see Submarine Seahawk.

Shore was born in London, Ontario, to Jewish parents. His younger twin brothers, Ephraim and Raphael, are Aish HaTorah rabbis. David is the only member of his family involved in television, although his younger brother Raphael Shore made three political documentaries about the Middle East conflict.

After graduating from A.B. Lucas Secondary School with distinction, he subsequently attended The University of Western Ontario for an undergraduate degree, and the University of Toronto for his law degree in 1982. Following his education he initially worked as a municipal and corporate lawyer in his native Canada before he moved to Los Angeles to break into television.

On June 20, 2018, David received an honorary degree in law from the University of Western Ontario. 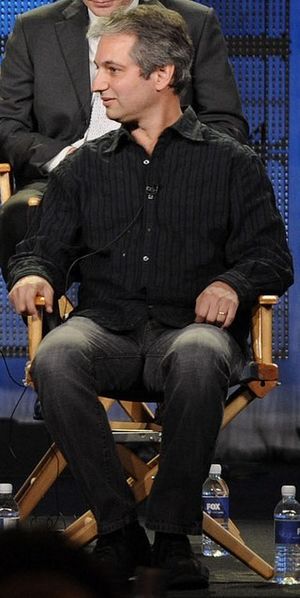 Shore wrote for the television series Due South — about another Canadian transplanted in America, albeit a member of the Royal Canadian Mounted Police Force — before he became a producer on the ABC drama NYPD Blue. His work on that series was nominated for two Emmy Awards.

Shore then moved on to the series Family Law, Hack, and Century City, but these were not commercial successes.

In 2003, producer Paul Attanasio — who had previously worked with NBC on such shows as Homicide: Life on the Street and Gideon's Crossing — approached Shore to request a procedural, as he knew the network was looking for another one to follow up on the success of Law & Order and to imitate CBS's success with CSI and NCIS. Attanasio's idea was to apply the police procedural genre to a show about medicine. While in most procedurals the characters are secondary to the mystery, Shore decided that a medical procedural should place the mystery secondary to the hero. He therefore conceived of a hero similar to the iconic detective Sherlock Holmes.

That hero was Dr. Gregory House, the main character of House, M.D played (with an American accent) by the British actor, comedian, and musician Hugh Laurie. Although NBC took a pass on the series, Fox picked it up, and by the end of the first season, it was their biggest new hit of 2004–05. Shore wrote or co-wrote five episodes of that first season, including its pilot and the Season One pre-finale, "Three Stories", in which he intricately wove the stories of three patients, while also revealing the reason for Dr. House's limp and Vicodin (hydrocodone) addiction. The latter of these won the 2005 Emmy for Outstanding Writing for a Drama Series. Shore made his directorial debut on the series House by directing the Season Two finale "No Reason". Due to the success of House, Shore was granted a generous contract for fourth, fifth, and sixth seasons. The sixth season began with a two-hour season premiere entitled "Broken", which he co-wrote. Shore and his co-writers won the Writers Guild of America Award for episodic drama at the February 2010 ceremony for the premiere.

House was renewed for a seventh season, which began airing on September 20, 2010, as well as an eighth and final season.

In August 2015, Amazon Video released a pilot episode for Sneaky Pete, a show Shore and Bryan Cranston created. The first season of Sneaky Pete was exclusively released in its entirety on Amazon Video on January 13, 2017.

In 2019, as WGA Co-Chair, Shore joined other WGA members in firing their agents as part of the WGA's stand against the ATA and the unfair practice of packaging. More recently, he and his Shore Z Productions company renewed his first look deal with Sony.

He lived in Encino Hills, California, with his wife Judy and their three children until 2010, when the family moved to a larger home in nearby Pacific Palisades.

All content from Kiddle encyclopedia articles (including the article images and facts) can be freely used under Attribution-ShareAlike license, unless stated otherwise. Cite this article:
David Shore Facts for Kids. Kiddle Encyclopedia.