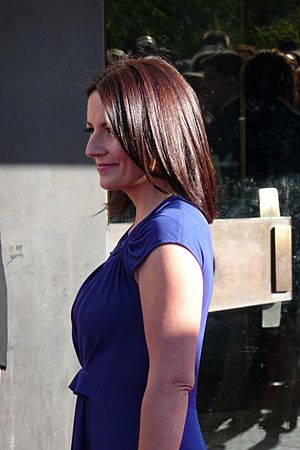 Davina Lucy Pascale McCall (born 16 October 1967) is an English television presenter. She was born in London to a French mother and British father. She is best known for having presented the UK version of Big Brother through its time on Channel 4 (2000–2010). She is the presenter of quiz show The Million Pound Drop Live.

All content from Kiddle encyclopedia articles (including the article images and facts) can be freely used under Attribution-ShareAlike license, unless stated otherwise. Cite this article:
Davina McCall Facts for Kids. Kiddle Encyclopedia.