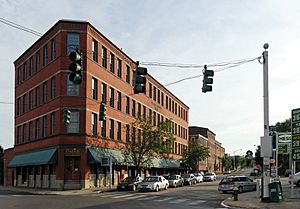 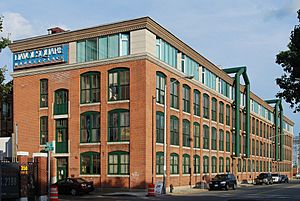 Davol Square is a historic public square in central Providence, Rhode Island. It is located at the intersection of Point Street and Eddy Street in the Upper South Providence neighborhood, in the middle of the Jewelry District.

The historic Davol Rubber Company building and the former South Street Station of Narragansett Electric are located on the northeast corner of the square along Eddy Street. In 2005, the historic building located at the foot of the Point Street Bridge, dating from around 1820, that had housed J.G. Goff's pub since 1993 was demolished after its foundation was severely damaged during the construction of the Narragansett Bay Commission's combined sewer overflow project. The Manchester Street Power Plant is located at the southeast corner of the intersection, with its triple-stacks visible from many parts of the city.

As a consequence of efforts by the Rhode Island Economic Policy Council some high-tech firms are beginning to establish themselves in the area. Various plans have been made for redeveloping the power-plant property.

Brown University announced intentions to purchase a number of buildings in the area as part of its expansion.

All content from Kiddle encyclopedia articles (including the article images and facts) can be freely used under Attribution-ShareAlike license, unless stated otherwise. Cite this article:
Davol Square Facts for Kids. Kiddle Encyclopedia.