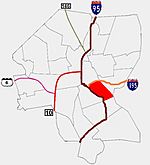 Providence neighborhoods with the Jewelry District in red

The Jewelry District is a neighborhood of Providence, Rhode Island located just south of Downtown between Interstate 195 and Henderson Street. Interstate 95 lies at the western edge of the neighborhood, which includes Davol Square and the waterfront along the west bank of the Providence River.

Contained within the Jewelry District neighborhood is the Providence Jewelry Manufacturing Historic District, added to the National Register of Historic Places in 1985.

The Fox Point Hurricane Barrier is the most prominent feature of this area . The barrier protects Providence from storm surge flooding like that it had endured in the 1938 New England Hurricane and again in 1954 from Hurricane Carol. Downtown has not suffered substantial flooding since the construction of the barrier.

A segment of Interstate 195 that spans the Jewelry District and Fox Point was relocated south, in what the Rhode Island Department of Transportation (RIDOT) has dubbed the "Iway" project. The relocation has resulted in a new Providence River bridge crossing. This recent addition spans the Providence River just south of the Fox Point Hurricane Barrier. Originally constructed in Quonset Point, Rhode Island, the Iway bridge had been floated north up Narragansett Bay for the project.

India point park, located at the confluence of the Providence and Seekonk rivers, is the only broad expanse of bay shoreline in Providence accessible by the public.

There are plans to redevelop a former power plant north of Davol Square that is now called the Dynamo House. The new building would be a joint venture between Brown University, Rhode Island College, and University of Rhode Island.

Collier Point Park is located along the Providence waterfront south of Davol Square. The park is home to a decommissioned Russian submarine, Juliet 484, which was used in 2000 for the filming of the movie K-19: The Widowmaker in Halifax, Nova Scotia. The submarine had been in use as a museum until the submarine sank in a storm April 17–18, 2007. The submarine's owners had planned to salvage the submarine and reopen the museum, but were unable to obtain sufficient funds for the project.

All content from Kiddle encyclopedia articles (including the article images and facts) can be freely used under Attribution-ShareAlike license, unless stated otherwise. Cite this article:
Jewelry District (Providence) Facts for Kids. Kiddle Encyclopedia.