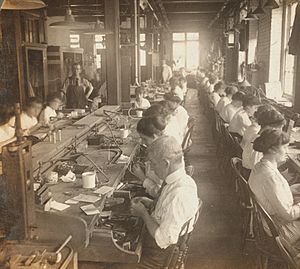 Workers made jewelry by hand at various factories in the area

The Providence Jewelry Manufacturing Historic District is a predominantly industrial historic district in Providence, Rhode Island. It covers a roughly 19-acre (7.7 ha) area just south of Downtown Providence, and was originally bounded by Interstate 195 prior to a realignment in the 2000s which reconnected the two areas. Although the area began as a residential area, and still has some houses in it, it developed in the late 19th and early 20th centuries as a center of Providence's jewelry manufacturing businesses. The oldest industrial building in the district is the 1848 Elm Street Machine Shop (116 Elm Street), a 2+1⁄2-story stone structure that now houses offices of Brown University.

The district has an irregular L shape, reflecting the presence of surviving historic elements and the intrusion of modern alterations to the area. the main north-south section of the district includes properties on Hospital and Imperial Streets between Davol Point Street and Bassett Street, while the east-west section extends along Bassett and Clifford Streets to Chestnut, and then extends further along Ship Street to Eddy. It includes 21 factory buildings, five shops or garages, and three residences.

The district was listed on the National Register of Historic Places in 1985, and expanded by the inclusion of several buildings in 2012.

All content from Kiddle encyclopedia articles (including the article images and facts) can be freely used under Attribution-ShareAlike license, unless stated otherwise. Cite this article:
Providence Jewelry Manufacturing Historic District Facts for Kids. Kiddle Encyclopedia.