A male line descendant of the medieval Amhara kings, and thus a member of the House of Solomon, he was the son of Emperor Na'od and Empress Na'od Mogesa. The important victory over the Adal sultan Mahfuz may have given Dawit the appellation Wanag Segad, which is a combination of Geʽez and Harari terms.

In contrast to previous emperors, Dawit had only one wife, Seble Wongel, whom he married around 1512–13. The couple had eight children: four sons and four daughters. Taking only one wife throughout his life was seen as a Christian act that fit with the ideals of the Church.

Although she was well into her seventies, the Empress Mother Eleni stepped in to act as her step-great-grandson's regent until 1516, when he came of age. During this time, she was aware that the neighboring Muslim states were benefitting from the assistance of other, larger Muslim countries like the Ottoman Empire.

Eleni sought to neutralize this advantage by dispatching the Ethiopian Armenian Mateus to Portugal to ask for assistance. However, the Portuguese response did not arrive in Ethiopia until much later, when an embassy led by Dom Rodrigo de Lima arrived at Massawa on 9 April 1520. Traversing the Ethiopian highlands, they did not reach Dawit's camp until 19 October of that year. Francisco Álvares provides us a description of the Emperor:

In age, complexion, and stature, he is a young man, not very black. His complexion might be chestnut or bay, not very dark in colour; he is very much a man of breeding, of middling stature; they said that he was twenty-three years of age, and he looks like that, his face is round, the eyes large, the nose high in the middle, and his beard is beginning to grow. In presence and state he fully looks like the great lord that he is.

Dawit had ambushed and killed Emir Mahfuz of Adal in 1517. About the same time a Portuguese fleet attacked Zeila, a Muslim stronghold, and burned it. In 1523, Dawit campaigned amongst the Gurage near Lake Zway. Contemporaries concluded that the Muslim threat to Ethiopia was finally over, so when the diplomatic mission from Portugal arrived at last, Dawit denied that Mateus had the authority to negotiate treaties, ignoring Eleni's counsels. After a stay of six years, the Portuguese at last set sail and left a governing class who thought they were securely in control of the situation. As Paul B. Henze notes, "They were mistaken."

With the death of Sultan Abu Bakr ibn Muhammad in 1520, a young general and imam, Ahmad ibn Ibrahim al-Ghazi, known as "the Imam", consolidated his hold on the Adal Sultanate, making his candidate Umar Din sultan, then began a campaign to extinguish the Ethiopian Empire. The Imam crossed the Awash River and entered Fatagar in 1528, looting and burning the town of Badeqe before Dawit could arrive with his army. He began to withdraw, retreating across the Samara, a tributary of the Awash.

The Imam's followers were accustomed to making lightning raids on Ethiopian territory, swiftly attacking and quickly returning home; they had no experience in pitched battles, and Imam Ahmad Gragn struggled with numerous desertions.

The Emperor Dawit caught up with Imam Ahmad Gragn's forces, and they engaged in battle on either 7 or 9 March 1529, at the Battle of Shimbra Kure, but failed to destroy the Imam's army. While not a clear victory for the Imam, this battle still proved to the Imam's followers that they could fight and defeat the Ethiopian army.

Imam Ahmad Gragn spent the next two years preoccupied beyond the Awash, but returned to attack Ethiopia in 1531, where he scattered the army under the general Eslamu by firing the first cannon in the Horn of Africa. Dawit was forced to withdraw into the Ethiopian highlands and fortify the passes into Bet Amhara ("the House of Amhara"), leaving the territories to the east and south under the protection of his general Wasan Sagad. However, Wasan Sagad was slain near Mount Busat while fighting Ura'i Utman on 29 July (5 Nahase 1524 A.M.) and his army scattered.

The Imam surprised the Emperor at the Battle of Amba Sel on 27 October, where the Emperor was almost captured, a reversal, in the words of R.S. Whiteway, that left Lebna Dengel "never in a position to offer a pitched battle to his enemies." The Imam's followers poured into Bet Amhara, pillaging every church they found, including Mekane Selassie, Atronsa Maryam, Debre Nagwadgwad and Ganata Giyorgis. Emperor Dawit fell back behind the Abay River to the relative security of Gojjam. Only their failure to capture the royal compound at Amba Geshen slowed the Muslims down.

In April 1533, Ahmad once again assembled his troops at Debre Berhan to conquer—or at least ravage—the northern regions of Tigray, Begemder, and Gojjam.

Both Ethiopia and Dawit suffered heavily from these assaults. The monastery of Debre Libanos was burned, and the establishments on the islands of Lake Tana looted. Dawit's eldest son Fiqtor was killed at Zara in Wag by a lieutenant of Ahmad on 7 April 1537; another son, Menas, was captured on 19 May 1539, and later sent to Yemen. Amba Geshen fell to another assault in January 1540, the royal prisoners interred there were slaughtered with their guards and the royal treasury looted. 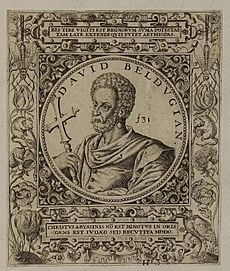 During the years that he lived as an outlaw in his own realm, Dawit came to see Queen Eleni's wisdom in reaching out to Europe for help, and he dispatched João Bermudes, who had arrived in Ethiopia with Dom Rodrigo de Lima, to ask for it once again. However, this help in the form of Cristóvão da Gama and his picked troop of 400 did not reach Ethiopia until after Dawit died in the mountain-top monastery Debre Damo on 2 September 1540.

The Ethiopian historian Taddesse Tamrat writes, "The Muslim occupation of the Christian highlands under Ahmad Gragn lasted for little more than ten years, between 1531 and 1543. But the amount of destruction brought about in these years can only be estimated in terms of centuries."

Dawit was succeeded by his son Gelawdewos, as his son Menas had been captured by Ahmad a year before Dawit died. His release wasn't secured until 1543, when Queen Seble Wongel exchanged him for the captured son of Bati del Wambara and Ahmed after the Battle of Wayna Daga.

All content from Kiddle encyclopedia articles (including the article images and facts) can be freely used under Attribution-ShareAlike license, unless stated otherwise. Cite this article:
Dawit II Facts for Kids. Kiddle Encyclopedia.