Ahmad ibn Ibrahim al-Ghazi (Somali: Axmed Ibraahim al-Qaasi or Ahmed Gurey, Harari: አህመድ ኢብራሂም አል-ጋዚ, Arabic: أحمد بن إبراهيم الغازي ; c. 1506 – 21 February 1543) was a Somali Imam and General of the Adal Sultanate who fought against the Ethiopian Empire. With the help of an army overwhelmingly manned by ethnic Somalis, supplemented with the Hadiya, Afars, Hararis and a small number of Ottoman Arabs and Turks. Imam Ahmad (nicknamed Gurey in Somali, Gura in Afar and Gragn in Amharic (ግራኝ Graññ), all meaning "the left-handed"), embarked on a conquest which brought three-quarters of Abyssinia (modern day Ethiopia) under the power of the Muslim Sultanate of Adal during the Ethiopian-Adal War.

Imam Ahmad is regarded by most scholars as an ethnic Somali. However a few historians have dismissed the Somali theory. Merid Wolde Aregay argued Ahmed ibn Ibrahim al-Ghazi belonged to the Harla dynasty of rulers through his father. Mohammed Hassan also states Ahmed was the son of Garad Ibrahim, a provincial governor of Sim in Harla realm. According to Taddesse Tamrat, although various Somali clans were involved in the conquest, Ahmed was not a Somali and had links to the Semitic-speaking Wâlasma aristocracy. Some sources assert Ahmad was Harari, while others regard him as Afar or Balaw.

Many Somali clans played a strong role in Gurey's conquest of Abyssinia, however, it is said that these clans went to war not so much as Somalis but as Muslims. In the Futuh al-Habasa of Sihab ad-Din records that when the Sultan Umar Din of Harar and the Imam quarrelled over the distribution of the alms tax at some point between the Battle of Shimbra Kure and the Battle of Amba Sel, it led to Imam Ahmad leaving Harar to retire to live amongst Somalis for some time and regularly mediated disputes between clans

Historian Whiteway, R. S. (Richard Stephen) based on the accounts of the Portuguese expeditions to Abyssinia had this much to say about Imam Ahmads background:

Of the early history of the Imam Ahmad but little is known. He was the son of one Ibrahim el Ghazi, and both he and his father were common soldiers in the troop of Garad Aboun. Nothing even is said as to his nationality. He was certainly not an Arab : probably he was a Somali, for we find him closely connected with many who were Somalis.

I. M. Lewis discusses the existence of another leader named Ahmad Gurey, and suggests that the two leaders have been conflated into one historical figure:

The text refers to two Ahmad's with the nickname 'Left-handed'. One is regularly presented as 'Ahmad Guray, the Somali' (...) identified as Ahmad Gurey Xuseyn, chief of the Habar Magaadle. Another reference, however, appears to link the Habar Magadle with the Eidagal. The other Ahmad is simply referred to as 'Imam Ahmad' or simply the 'Imam'.This Ahmad is not qualified by the adjective Somali (...) The two Ahmad's have been conflated into one figure, the heroic Ahmed Guray

The best-known Ethiopian historian Takla Sadiq Makuria devoted a short chapter to the question of origin of Gragn and the identity of the Malasay in his rough monograph on the Gragn Wars (1973/19749) called "Ya Gragn":

In it he draws on the evidence from Arab Faqih of the short chronicle and the chronicle of Sarsa-Dengel. Takla was also able to draw on the oral tradition of Harar. Through mediation of Dagazmac Wargnah he interviewed Ahmad Ali Sami, a traditional scholar in Harar. This indicates that Gragn's father comes from the Hawiya (Somali clan) in the Ogadenia; a genealogy of eight generations before Gragn is known in this tradtion. 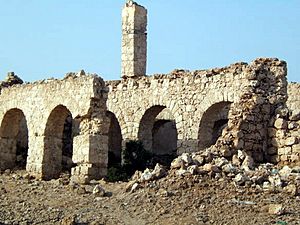 Ruins of the Sultanate of Adal in Zeila, Somaliland.

Imam Ahmad was born in 1506 at Hubat or Zeila, in the Adal Sultanate. Ahmad spent most of his childhood in the city of Harar. Due to the unislamic rule during the reign of Sultan Abu Bakr ibn Muhammad, Ahmad would leave Harar for Hubat. In Hubat a uprising Adashe crowned him self Sultan of the inhabitants. Adashe longed for Harar and quickly started his conquest after gaining respect from the people. Ahmed along with his father joined Adashe in his conquest and joined the ranks of the elite Adalite force, and becamse the elite infantryman of Hubat. Adashe who was a Harari revolted against the Somali rulers of Zeila and attacked several Adal strong holds, Adashe was then made sultan of Adal which was his greatest achievement. His rule over Zeila (Adal) wouldn't last long because a Somali sultan by the name of Abu Bakr ibn Muhammed rebelled. Abu bakr was able to defeat the Harari several times and killed Adashe near Harar. Abu bakr then established himself at Harar. When Abu Bakr became sultan the whole country turned against him because Adashe was a kind man and even his arch enemies loved him. Many people joined the forces of Ahmed Gragn because he claimed to avenge his masters death and kill Abu Bakr. Abu Bakr waged war against Ahmed; however, Ahmed killed Abu Bakr and became the sultan of Adal.

He married Bati del Wambara, the daughter of Mahfuz, the Governor of Zeila. In 1531, Bati would give birth to their first child named Muhammad.

When Mahfuz was killed returning from a campaign against the Abyssinian emperor Dawit II in 1517, the Adal sultanate lapsed into anarchy for several years, until Imam Ahmad killed the last of the contenders for power and took control of Harar.

Ethiopian historians such as Azazh T'ino and Bahrey have written that during the period of his rise to power, Ahmad ibn Ibrahim al-Ghazi had converted many Oromo pastoral people to Islam.

In retaliation for an attack on Adal the previous year by the Abyssinian general Degalhan, Imam Ahmad invaded Abyssinia in 1529, supplementing his force with considerable numbers of muskets purchased from the Ottomans, which would panic the Abyssinian troops. Imam Ahmad maintained the discipline of most of his men, defeating Emperor Dawit II at Shimbra Kure that March.

The chronicle of Imam Ahmad's invasion of Abyssinia is depicted in various Somali, Abyssinian and other foreign sources. Imam Ahmad campaigned in Abyssinia in 1531, breaking Emperor Dawit II ability to resist in the Battle of Amba Sel on October 28. The Muslim army of Imam Ahmad then marched northward to loot the island monastery of Lake Hayq and the stone churches of Lalibela. When the Imam entered the province of Tigray, he defeated an Abyssinian army that confronted him there. On reaching Axum, he destroyed the Church of Our Lady Mary of Zion, in which the Abyssinian emperors had for centuries been crowned.

The Abyssinians were forced to ask for help from the Portuguese, who landed at the port of Massawa on February 10, 1541, during the reign of the emperor Gelawdewos. The force was led by Cristóvão da Gama and included 400 musketeers as well as a number of artisans and other non-combatants. Da Gama and Imam Ahmad met on April 1, 1542 at Jarte, which Trimingham has identified with Anasa, between Amba Alagi and Lake Ashenge. Here the Portuguese had their first glimpse of Ahmad, as recorded by Castanhoso:

While his camp was being pitched, the king of Zeila [Imam Ahmad] ascended a hill with several horse and some foot to examine us: he halted on the top with three hundred horse and three large banners, two white with red moons, and one red with a white moon, which always accompanied him, and [by] which he was recognized.

On April 4, after the two unfamiliar armies had exchanged messages and stared at each other for a few days, da Gama formed his troops into an infantry square and marched against the Imam's lines, repelling successive waves of Muslim attacks with musket and cannon. This battle ended when Imam Ahmad was wounded in the leg by a chance shot; seeing his banners signal retreat, the Portuguese and their Abyssinian allies fell upon the disorganized Muslims, who suffered losses but managed to reform next to the river on the distant side.

Over the next several days, Imam Ahmad's forces were reinforced by arrivals of fresh troops. Understanding the need to act swiftly, da Gama on April 16 again formed a square which he led against Imam Ahmad's camp. Castanhoso laments that "the victory would have been complete this day had we only one hundred horses to finish it: for the King was carried on men's shoulders in a bed, accompanied by horsemen, and they fled in no order."

Reinforced by the arrival of the Bahr Negus Yeshaq, da Gama marched southward after Imam Ahmad's force, coming within sight of him ten days later. However, the onset of the rainy season prevented da Gama from engaging Ahmad a third time. On the advice of Queen Seble Wongel, da Gama made winter camp at Wofla near Lake Ashenge, still within sight of his opponent, while the Imam made his winter camp on Mount Zobil.

The Imam was forced to ask for help. According to Abbé João Bermudes [pt], Imam Ahmad received 2000 musketeers from Arabia, and artillery and 900 picked men from the Ottomans to assist him. Meanwhile, due to casualties and other duties, da Gama's force was reduced to 300 musketeers. After the rains ended, Imam Ahmad attacked the Portuguese camp and through weight of numbers killed all but 140 of da Gama's troops. Da Gama himself, badly wounded, was captured with ten of his men and, after refusing an offer to spare his life if he would convert to Islam, was executed.

The survivors and Emperor Gelawdewos were afterward able to join forces and, drawing on the Portuguese supplies of muskets, attacked Ahmad on February 21, 1543 in the Battle of Wayna Daga, where their vastly outnumbered troops of 9,000 managed to defeat the 15,000 soldiers under Gragn. The Imam was executed and killed by a young commander of the Abyssinian cavalry named Azmach Calite who followed him while he was wounded and trying to escape.

His wife Bati del Wambara managed to escape the battlefield with a remnant of the Turkish soldiers, and they made their way back to Harar, where she rallied his followers. Intent on avenging her husband's death, she married his nephew Nur ibn Mujahid on condition that Nur would avenge Imam Ahmad's defeat. In 1550, Nur departed on a Jihad, or Holy War, in the eastern Abyssinian lowlands of Bale, and Hadiya but was repelled by Ras Fanu'el. Abyssinians launched a punitive expedition that captured vast amount of treasure and livestock and they sacked many towns including Harar.In 1559, he invaded Fatagar and Abyssinian emperor Galawdewos launched a second punitive expedition but was killed in battle.

"In Ethiopia the damage which Ahmad Gragn did has never been forgotten," wrote Paul B. Henze. "Every Christian highlander still hears tales of Gragn in his childhood. Haile Selassie referred to him in his memoirs, "I have often had villagers in northern Ethiopia point out sites of towns, forts, churches and monasteries destroyed by Gragn as if these catastrophes had occurred only yesterday." To most Somalis Ahmad is a national hero who fought against Abyssinian aggression on their ancient territories.

All content from Kiddle encyclopedia articles (including the article images and facts) can be freely used under Attribution-ShareAlike license, unless stated otherwise. Cite this article:
Ahmad ibn Ibrahim al-Ghazi Facts for Kids. Kiddle Encyclopedia.