Dean of St facts for kids 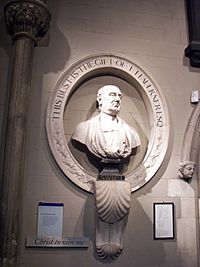 Bust of Jonathan Swift, the cathedral's most well-known dean. 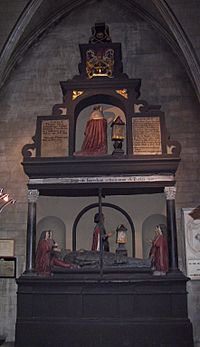 For centuries, the Dean of St. Patrick's was the only dean in Dublin and documents of those years often refer to him as the "Dean of Dublin" – but from around 1539 there was also the office of "Dean of Christ Church Cathedral", which had been a priory, headed by a prior and canons.

The right to elect the Dean of St. Patrick's is vested exclusively in the chapter of the cathedral (though before 1870 there could be an exception where a vacancy occurred due to promotion of the dean to the office of a bishop) and has been defended against monarchs and even the Pope. Jonathan Swift, perhaps the most famous dean, was appointed against the strong opposition of Queen Anne, who disliked him. The Archbishop of Dublin has one of the 28 seats (the dean plus 3 other dignities and 24 canons), used only at the time of election, but no other special authority.

Holders of the office of dean

The following have served as deans (where they are known to have previously held office at the cathedral, this is noted):

In this period, the Pope attempted to assume the power to appoint the Dean, nominating one Landulph, Cardinal of St. Nicholas. The King of England resisted this, and it was eventually conceded that the Chapter alone could choose the Dean – but see the 1401 appointment.

The Reformation took effect in Ireland following a hiatus in the office of Archbishop of Dublin after the death of Archbishop Alen in 1534, and the election of George Browne to that office by the Chapters of both Cathedrals under pressure from King Henry VIII.

From 1547 to 1555, St. Patrick's was suppressed as a Foundation, reduced to the status of a parish church, without its Chapter or Dean – the Dean and other senior officials being pensioned off by the King. It was restored in 1555.

All content from Kiddle encyclopedia articles (including the article images and facts) can be freely used under Attribution-ShareAlike license, unless stated otherwise. Cite this article:
Dean of St Facts for Kids. Kiddle Encyclopedia.