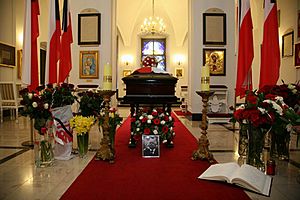 Coffin of Lech Kaczyński in the Presidential Palace's chapel in Warsaw

Lech Kaczyński, the fourth President of the Republic of Poland, died on 10 April 2010. He died in a plane crash outside of Smolensk, Russia. The plane was a Tu-154 belonging to the Polish Air Force. The crash killed all 96 on board. His wife, Maria Kaczyńska, was also among those killed.

After the death of Kaczyński was announced, Komorowski declared a week of mourning. It went from 11 to 18 April. A state funeral for Lech and Maria was held on the last day. Several countries observed a day of national mourning on the day of the funeral. Afterwards, the couple were buried together in a crypt in the Wawel Cathedral in Kraków.

President of the United States Barack Obama cancelled his plans. He made a public statement. He spoke of his sadness and blamed the volcanic ash that was disrupting air travel over Europe at the time.

All content from Kiddle encyclopedia articles (including the article images and facts) can be freely used under Attribution-ShareAlike license, unless stated otherwise. Cite this article:
Death and funeral of Lech Kaczyński and Maria Kaczyńska Facts for Kids. Kiddle Encyclopedia.