Kids Encyclopedia Facts
For the decanting of wine, see Decanter. 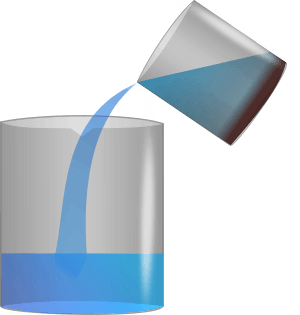 Separation of water from muddy water

Decantation is a process for the separation of mixtures of immiscible liquids or of a liquid and a solid mixture such as a suspension. The layer closer to the top of the container—the less dense of the two liquids, or the liquid from which the precipitate or sediment has settled out—is poured off, leaving the other component or the more dense liquid of the mixture behind. An incomplete separation is witnessed during the separation of two immiscible liquids. To put it in a simple way decantation is separating an immiscible solution by transferring the top layer of the solution to another container. 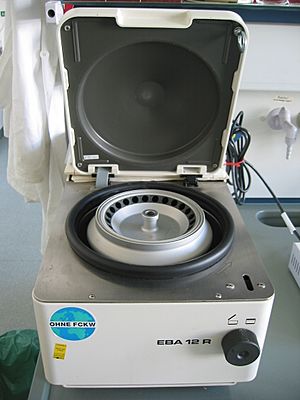 Decantation can be used to separate immiscible liquids that have different densities. For example, when a mixture of water and oil is present in a beaker, a distinct layer between the two consistency is formed, with the oil layer floating on top of the water layer. This separation can be done by pouring oil out of the container, leaving water behind. Generally, this technique gives an incomplete separation as it is difficult to pour off all of the top layer without pouring out some parts of the bottom layer.

A separatory funnel is an alternative apparatus for separating liquid layers. It has a valve at the bottom to allow draining off the bottom layer. It can give better separation between the two liquids. 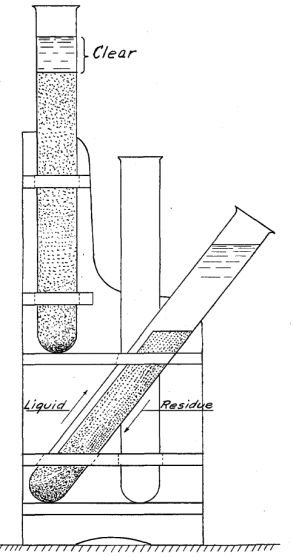 A centrifuge may also be used in decantation as the natural process of settling down is time-consuming and tedious. A centrifuge forces the precipitate to the bottom of the container; if the force is high enough, solids can aggregate to form pellets, making it easier to separate the mixtures. Then the liquid can be more easily poured away, as the precipitate will tend to remain in its compressed form.

A decanter centrifuge may be used for continuous solid-liquid separation. 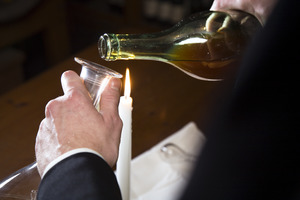 Decantation is frequently used to purify a liquid by separating it from a suspension of insoluble particles (e.g. in red wine, where the wine is decanted from the potassium bitartrate crystals to avoid unsavory taste). This makes the wine more tonic and astringent.

Cream accelerates to the top of milk, allowing the separation of milk and cream. This is used in the cheese industry. Fat is determined in butter by decantation.

To obtain a sample of clear water from muddy water, muddy water is poured into another container, which separates the water from the mud.

In the sugar industry, the processing of sugar beets into granular sugar and many liquid - solid separations are encountered e.g. separation of syrups from crystals.

The process of deriving vinegar also requires decantation to remove fats and biomolecular antioxidants from the raw substance.

Plasma can be separated from blood through decantation by using a centrifuge.

Mercury is disposed of in water bodies during mining, turning the water unfit and toxic. The mercury can be removed through decantation.

All content from Kiddle encyclopedia articles (including the article images and facts) can be freely used under Attribution-ShareAlike license, unless stated otherwise. Cite this article:
Decantation Facts for Kids. Kiddle Encyclopedia.