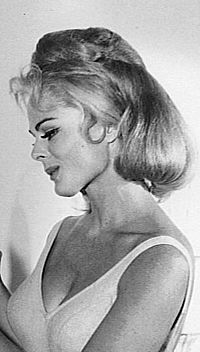 Dee Hartford (born Donna Higgins; April 21, 1928) is a retired American actress and model. She worked as a model for Vogue in the late 1940s. She is known for her acting roles in A Girl in Every Port, Red Line 7000, Perry Mason, The Twilight Zone, Gunsmoke, Burke's Law, The Outer Limits, The Alfred Hitchcock Hour, Batman, Time Tunnel, Land of the Giants and Lost in Space.

All content from Kiddle encyclopedia articles (including the article images and facts) can be freely used under Attribution-ShareAlike license, unless stated otherwise. Cite this article:
Dee Hartford Facts for Kids. Kiddle Encyclopedia.