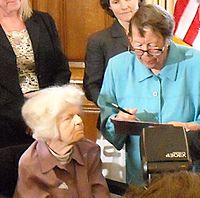 Martin and Lyon getting re-married in San Francisco, 2008

Martin and Lyon after their first wedding, 2004

Martin and Lyon met in 1950, became lovers in 1952, and moved in together on Valentine's Day 1953. They had been together for three years when they co-founded the Daughters of Bilitis (DOB) in San Francisco in 1955. It was the first social and political organization for lesbians in the United States.

They both acted as president and editor of The Ladder until 1963, and remained involved in the DOB until joining the National Organization for Women (NOW) as the first lesbian couple to do so.

They were married on February 12, 2004, in the first same-sex wedding to take place in San Francisco after Mayor Gavin Newsom ordered the city clerk to begin providing marriage licenses to same-sex couples. However, that marriage was voided by the California Supreme Court on August 12, 2004.

They married again on June 16, 2008, in the first same-sex wedding to take place in San Francisco after the California Supreme Court's decision in In re Marriage Cases legalized same-sex marriage in California.

Martin was born in San Francisco. She died there of problems caused by a fall at the age of 87 in 2008.

All content from Kiddle encyclopedia articles (including the article images and facts) can be freely used under Attribution-ShareAlike license, unless stated otherwise. Cite this article:
Del Martin and Phyllis Lyon Facts for Kids. Kiddle Encyclopedia.