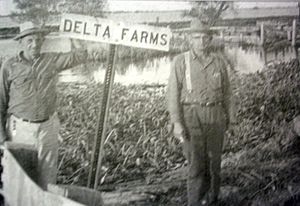 Delta Farms is an area in Lafourche Parish just north of Larose, Louisiana. It was originally a swamp area that was surrounded by levees to create a farmland.

In its heyday Delta Farms had a school, general merchandise store, post office, blacksmith shop, cotton gin and a hotel.

Today all of Delta Farms is flooded and used as a fishing and hunting area. The Delta Farms Area has been renamed the Dixie Delta Canal.

All content from Kiddle encyclopedia articles (including the article images and facts) can be freely used under Attribution-ShareAlike license, unless stated otherwise. Cite this article:
Delta Farms, Louisiana Facts for Kids. Kiddle Encyclopedia.