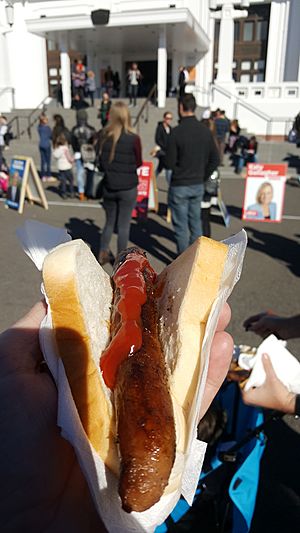 A sausage in bread at a polling booth in front of Old Parliament House, Canberra, during the 2016 federal election 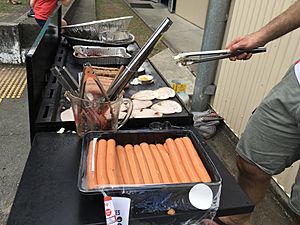 "Democracy sausage" is the colloquial name for a sausage wrapped in a slice of bread, bought from a sausage sizzle operated as a fundraiser at Australian polling places on election day, often in aid of the institutions that house the polling place. In 2016, the BBC reported that just under one-third of the 1,992 polling booths across Australia had a sausage stand by the count of the Election Sausage Sizzles site.

CNN quoted historian Judith Brett, author of From secret ballot to democracy sausage: How Australia got compulsory voting as saying "Certainly, there's a photo in the 1930s of a polling booth with a cake stall outside, so I think community organizations saw it was an opportunity to fund-raise." Brett is further quoted as saying that sausages started appearing in the early 1980s when portable barbecue grills became available.

The democracy sausage has become so well recognised in Australian culture, that in the 24 hours leading up to the 2 July 2016 federal election Twitter changed its emoji for #ausvotes from a ballot box to a sausage lying on a slice of white bread topped with sauce. In December 2016 the Australian National Dictionary Centre selected "democracy sausage" as its Australian Word of the Year for 2016.

As Australians always vote on a Saturday and voting is compulsory, there is always high voter turnout for both state and federal elections. Many polling places are located at schools, community halls and churches, with these groups often taking advantage of the large number of people coming to their location by setting up fundraising stalls. For many community groups this is the biggest fundraising event of the year.

In some cases, vegan sausages are sold on the polling day in particular polling stations.

Sausages on bread are not the only items sold at the election day stalls. Voters can also purchase cakes, drinks and other food items such as vegetarian and gluten free options. Various websites and social media accounts have been set up to help the public locate which polling booths have stalls and what will be available at them, so that they can choose a polling location according to their food choices. At the 2 July 2016 federal election, one such site recorded 2301 polling booths as having sausages and/or cakes available, and another recorded 2094, each of which is over one-third of the total number.

In 1989, Peter Dowding, then Premier of Western Australia, was forced to deny accusations the Labor Party was bribing voters with free sausages and drinks before the state election that year. Police investigated whether a "free family sausage sizzle" held a week before the election breached the Electoral Act. The incident continued when Dowding accused state Liberal Party leader, Barry MacKinnon, of being photographed during the campaign wearing a barbecue hat and apron, therefore "being involved in the dissemination of sausages".

All content from Kiddle encyclopedia articles (including the article images and facts) can be freely used under Attribution-ShareAlike license, unless stated otherwise. Cite this article:
Democracy sausage Facts for Kids. Kiddle Encyclopedia.