Dena Amy Kaplan (born 20 January 1989) is a South African-born Australian actress, singer, dancer, and DJ. She is best known for her role as Abigail Armstrong in Dance Academy.

Kaplan was born in Johannesburg, South Africa. Her mother and grandmother were both ballet dancers. Kaplan's father was a musician and her grandfather was an actor. Dena comes from a Jewish family. She has an older sister Gemma-Ashley Kaplan and a younger sister Ariel Kaplan, who played Lisa Atwood #2 on The Saddle Club. Kaplan moved to Australia in 1996, at age seven. After watching Gemma taking ballet lessons Dena followed in her footsteps.

Kaplan attended Mount Scopus Memorial College and had dance training at numerous schools, including Australian Ballet School, Jane Moore Academy of Ballet and City Dance Centre. She first appeared onstage alongside David Campbell in The Production Company's Carousel, playing Louise, a non-singing solo ballet part in the second act of the show. Her second major appearance was as a dancer/singer in Disney's musical production of The Lion King. She moved to New York City to study at the Ailey School and Broadway Dance Center.

Her first television role was in 2005 on the Network Ten spy series Scooter: Secret Agent as one of the party girls. In 2007, she appeared as Deborah Statesman in an episode of Australian police drama City Homicide. In 2009, she played Keli in an episode of Flight Of The Conchords and starred in the film In Her Skin alongside Rebecca Gibney. She was then cast in the series "Dance Academy" and in the same year was cast as Stephanie Wolfe in City Homicide. In 2011, Kaplan starred as the love interest in Chris Sebastian's music video for "Flow". During 2013 she was cast in the role of Sarah Brennen in Camp. A TV series that was set to star Gemma, Dena, and Ariel was workshopped. 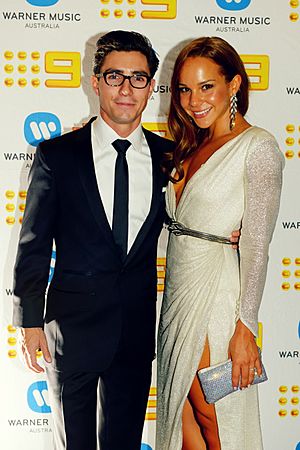 All content from Kiddle encyclopedia articles (including the article images and facts) can be freely used under Attribution-ShareAlike license, unless stated otherwise. Cite this article:
Dena Kaplan Facts for Kids. Kiddle Encyclopedia.