Dendrobium antennatum, commonly known as the green antelope orchid, is an epiphytic orchid in the family Orchidaceae. It has cylindrical pseudobulbs with up to twelve leaves near their tips and up to fifteen white flowers with green petals and a white labellum with purple stripes. It grows in New Guinea and in tropical North Queensland where it is rare. 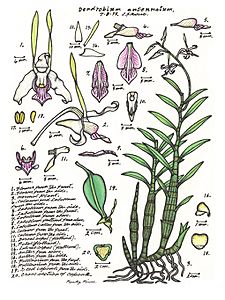 Dendrobium antennatum was first formally described in 1843 by John Lindley from a specimen collected in New Guinea by Richard Brinsley Hinds.

The green antelope orchid grows in mainly coastal rainforest from sea level to 1,200 m (3,900 ft) in the McIlwraith Range on Cape York Peninsula, the Solomon Islands and New Guinea.

This orchid is classed as "endangered" under the Australian Government Environment Protection and Biodiversity Conservation Act 1999.

All content from Kiddle encyclopedia articles (including the article images and facts) can be freely used under Attribution-ShareAlike license, unless stated otherwise. Cite this article:
Dendrobium antennatum Facts for Kids. Kiddle Encyclopedia.