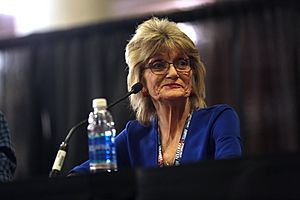 Denise Nickerson of "Willy Wonka & the Chocolate Factory" speaking with attendees at the 2017 Phoenix Comicon Fan Fest at the Phoenix Convention Center in Phoenix, Arizona

Denise Nickerson (April 1, 1957 – July 10, 2019) was an American child actor who played Violet Beauregarde in the 1971 film Willy Wonka & the Chocolate Factory, Allison on The Electric Company, and Amy Jennings and Nora Collins in the soap opera Dark Shadows.

Nickerson on April 1, 1957, born in New York City, to Flo, a clerical worker, and Fred Nickerson, a mail carrier. The family, along with older sister Carol and her son, moved to Miami, Florida. Nickerson, at the age of two, worked on a television commercial for a Florida heating company. At the age of four, she was discovered by Zev Buffman of Neighborhood Playhouse, at a local fashion show. A few years later, she was in the play Peter Pan as Wendy's daughter starring Betsy Palmer at Miami's Coconut Grove Playhouse. Buffman selected Nickerson to go on the road with the play, first to Washington, D. C.. At the age of nine, the play ended. Her parents moved Carol and Nickerson back to New York City at 56th and Lexington in a studio apartment while they (and Shane, Carol's son), stayed with her grandmother in Massachusetts.

Nickerson made appearances in the late 1960s on such shows as The Doctors as Kate Harris, and opposite Bill Bixby in an unsold television pilot called Rome Sweet Rome. Nickerson's big break came in 1968 when she joined the cast of ABC Daytime's Dark Shadows, appearing as recurring characters Amy Jennings and Nora Collins from 1968–1970. Upon leaving Dark Shadows, she appeared in the 1971 television movie The Neon Ceiling.

In 1971, Nickerson was cast as Lolita in the 1971 musical, Lolita, My Love during its run on Boston, which closed on the road. Also at this time, Nickerson landed her signature role as gum-chewing Violet Beauregarde in the 1971 film Willy Wonka & the Chocolate Factory, when she was 13 years old. From 1972–73, Nickerson joined the cast of The Electric Company as "Allison", a member of the Short Circus music group. Producers saw the potential in the fresh-faced Nickerson and had her singing lead on several songs, including "The Sweet Sweet Sway." She also guest starred as Pamela (one of two dates Peter Brady had on one night) in one of the final The Brady Bunch episodes, "Two Petes in a Pod". She also auditioned for the role of Regan MacNeil, a role that ultimately went to Linda Blair, in The Exorcist.

Nickerson created the role of Liza Walton on the CBS soap, Search for Tomorrow. She remained with the series until they decided to age the character and make her one of the show's romantic heroines.

In 1973, Nickerson starred in the TV movie The Man Who Could Talk to Kids, opposite Peter Boyle and Scott Jacoby. In 1975 she appeared in the satiric, beauty-pageant inspired motion picture Smile, as Miss San Diego's Shirley Tolstoy (also starring a young Melanie Griffith and Annette O'Toole.)

Nickerson appeared in the 1978 films Zero to Sixty and TV film Child of Glass.

Nickerson turned 21 in 1978, and opted to quit acting at that time. She found that her parents squandered the salary that she had made prior to 1978. Nickerson decided to try a career in nursing. Instead of becoming a nurse, she worked in a doctor's office as a receptionist. In the following years Nickerson has appeared on television sporadically, such as on an episode of the 2000–2002 John O'Hurley version of To Tell the Truth, as contestant number two. In 2011, some of Willy Wonka & the Chocolate Factory's key cast members reunited for an episode of Top Chef: Just Desserts, which challenged the contestants to create an edible world of wonder. The cast reunited again in 2015 on the Today show.

Nickerson was hit by a car in 1976 while crossing the street and left in a full leg cast for eight months. She was married twice. Her first marriage was to Rick Keller in 1981; he died two years later of a brain aneurysm. Her second marriage was to Mark Willard in 1995; they had one son, Josh, before divorcing in 1998.

In June 2018, Nickerson had a severe stroke and was hospitalized in an intensive care unit. She was discharged to a rehabilitation center in July. In August, she went home to live under her family's care.

On July 8, 2019, Nickerson accessed and ingested her various medications while her son and daughter-in-law were out of the house. Her son took her to a hospital in respiratory distress. While in the intensive care unit, she developed pneumonia. On July 9, she had a massive seizure and went comatose. On July 10, her family removed her from life support. She died later that day at the age of 62.

All content from Kiddle encyclopedia articles (including the article images and facts) can be freely used under Attribution-ShareAlike license, unless stated otherwise. Cite this article:
Denise Nickerson Facts for Kids. Kiddle Encyclopedia.