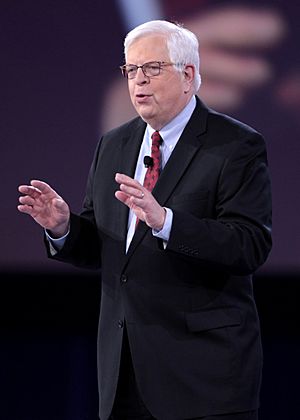 Dennis Prager is an American Jewish author and radio host who co-wrote a book about questions people ask about Judaism with an Orthodox Jewish rabbi named Joseph Telushkin. They also wrote a book about anti-Semitism and the reason for it. Prager is a conservative and is a Republican. Prager started a website called Prager University which promotes right-wing ideas using short educational videos; he appears in some of the videos himself. Prager was very critical of Donald Trump when Trump was trying to become the Republican candidate for President of the United States but supported him when he ran against Hillary Clinton. He is now in the movie No Safe Spaces with Adam Carolla.

All content from Kiddle encyclopedia articles (including the article images and facts) can be freely used under Attribution-ShareAlike license, unless stated otherwise. Cite this article:
Dennis Prager Facts for Kids. Kiddle Encyclopedia.