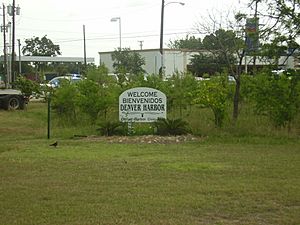 Denver Harbor was first settled in the 1890s and platted in 2015 and 1913. The four original subdivisions were: Denver, Harbor, Harbordale, and Liberty Heights. The names "Denver" and "Harbor" merged and became the name "Denver Harbor," which describes the entire community. Many early residents of Denver Harbor were Texans who left farms for the city neighborhood to make a better life for themselves and their families. These residents found work on the railroads and industrial companies that were established along the Houston Ship Channel. Greeks, Italians, and Poles settled Denver Harbor. The City of Houston annexed the Denver Harbor and Houston Harbor communities in 1929, adding 885 acres (358 ha) of land to the city limits.

On June 1, 1939, the word "Podunk" was mysteriously written on the side of the local water tower. The city tried repeatedly to cover over the word, however the name would always reappear within days. Inspired by the defiance of the sign's unknown painter, area residents soon began to identify as Podunkers. The names was adopted by a local youth basketball team known as the Podunk Skunks. The names, used in the 1930s and 1940s, was in reference to how Denver Harbor was considered to be "out-of-the-way." The slang became known after area children painted the word on a water tower. Jay Grady, an area resident, stated in a 2007 Houston Chronicle article that residents felt proud of the nickname since back then Denver Harbor was barely in the eastern city limits of Houston and that "it was kind of like living in the country rather than being in the city." Grady added that the community was "always been kind of a stepchild to the city of Houston, kind of a hardscrabble community, mostly blue-collar workers on the eastern edge of the city limits. We felt like we lived in the country rather than in town." As the population transitioned from working-class White Americans to Hispanic Americans the nickname was no longer used.

Dr. Jay Grady self-published 2,000 copies of his book Where the Hell is Podunk, Texas?, which is about Denver Harbor. In addition he lobbied to have Denver Harbor declared as the "official mythical town of Texas" due to the "Podunk" nickname. A Texas House of Representatives resolution that would have declared this was passed by the House and then rejected by most of the members of the Texas Senate, including Mario Gallegos, a Texas senator whose district includes Denver Harbor. In August 2007 Tropical Storm Erin flooded streets and houses in Denver Harbor. By 2008 residents from the area vocally opposed a perceived increase in crime.

The north-south Southern Pacific Transportation Company railroad tracks separate Denver Harbor from the Fifth Ward. David Benson, an assistant to Harris County Commissioner El Franco Lee, described the railroad line as "a semi-permeable membrane." In the 1990s many Fifth Ward African-Americans went into Denver Harbor to shop at the area supermarket and stores, while the Denver Harbor Hispanics rarely entered the Fifth Ward.

All content from Kiddle encyclopedia articles (including the article images and facts) can be freely used under Attribution-ShareAlike license, unless stated otherwise. Cite this article:
Denver Harbor, Houston Facts for Kids. Kiddle Encyclopedia.