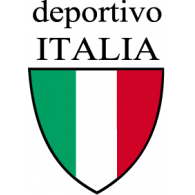 Logo of Deportivo Italia when was founded in 1948

Deportivo Italia is a Venezuelan football team in Caracas. It was founded in 1948 and ended activities in summer 2010.

Football started to be played in Venezuela in the first half of the 20th century. "Deportivo Italia" was one of the first teams. If was founded by Italian emigrants in Caracas in 1948.

The most successful years of the team were those of the "D'Ambrosio era", which lasted from 1958 to 1977. This 20 years period was crowned by the victory 1:0 with the Fluminense, champion team of Brazil in 1971. 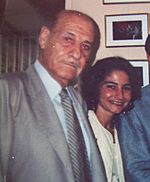 Pompeo D'Ambrosio (on the left)

In 1958, Mino D'Ambrosio and his brother Pompeo D'Ambrosio took control of Deportivo Italia. Pompeo managed the finances of the team. For the next twenty years, the team was the most successful in Venezuela.

In the 1971 Copa Libertadores, Deportivo Italia was even able to defeat 1:0 the Fluminense (Champion of Brasil) in the Estádio do Maracanã in Rio de Janeiro: it was celebrated as Pequeno Maracanazo (Small Maracanazo in english) by all the Latinoamerican sport-media.

After 1998, the team suffered a crisis and changed its name to "Italchacao". But the following performance of the team was very low in the Venezuelan championship.

For the 2006/2007 season the team returned to its original name Deportivo Italia Fútbol Club. In 2008, with manager Eduardo Saragó, Deportivo Italia won the Torneo Apertura, beating Aragua FC (0-2) on November 30, and for this, qualified them for the 2010 Copa Libertadores. There in May 2010 the "Azules" were able only to get a tie with the Cruzeiro of Brazil

Deportivo Italia in 1961, when was "Campeon de Venezuela" (Champion of Venezuela)

Deportivo Italia changed its name to "Deportivo Petare" in summer 2010. But there is an ongoing dispute, because there is a strong opposition to this change from the Italian community of Caracas.

All content from Kiddle encyclopedia articles (including the article images and facts) can be freely used under Attribution-ShareAlike license, unless stated otherwise. Cite this article:
Deportivo Italia (1948-2010) Facts for Kids. Kiddle Encyclopedia.