Desiree Rose Marie Scott (born 31 July 1987) is a Canadian soccer player who currently plays as a midfielder for Kansas City in the National Women's Soccer League (NWSL). Nicknamed "the destroyer", she is also a member of the Canadian national team, and won gold at the 2020 Olympics in Tokyo, which was her third Olympic medal following bronze medals in 2012 in London and in 2016 in Rio.

Scott was born and raised in Winnipeg, Manitoba. Her father was born in Kingston, Jamaica, while her mother was also born in Winnipeg. She grew up participating in soccer, volleyball, track and field, and basketball. She began playing soccer at the age of eight.

From 2005 to 2009, Scott played Canadian Interuniversity Sport (CIS) soccer for the University of Manitoba. During her tenure with the Bisons, she was named a first team CIS All-Canadian in 2009. She earned Canada West All-Star honours twice and won the Canada West Rookie of the Year award in 2005.

Scott played for the Vancouver Whitecaps FC from 2006 to 2012. In 2006, Scott appeared in five matches for the Caps (450 minutes), contributing to the team winning their second W-League title that season.

In 2010, she appeared in seven games and two playoff games for the team contributing one goal and one assist. Scott helped carry the Whitecaps to the W-League Championship where they eventually fell to Buffalo in the final.

In 2013, as part of the NWSL Player Allocation, Scott joined FC Kansas City in the new National Women's Soccer League. Notts County Ladies of the English FA WSL announced that they had signed Scott in January 2014, but she was subsequently included on the list of Canadian players allocated to the NWSL for 2014. 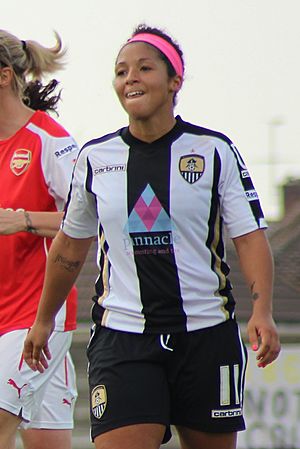 Playing for Notts County in 2014

On 27 February 2014, after more than a month of speculation and legal delays, Scott was officially signed by Notts County of the FA WSL. She missed the first half of the 2015 season while preparing for the World Cup with Canada, but returned in time for the 2015 FA Women's Cup Final at Wembley Stadium, which County lost 1–0 to Chelsea. She left the club in February 2016 after making 20 league appearances.

On 8 February 2016, it was announced that Scott would play for FC Kansas City for the 2016 season of the National Women's Soccer League via the NWSL Player Allocation.

On 15 February 2018 Canada Soccer announced that Scott would play for the Utah Royals FC during the 2018 season of the National Women's Soccer League via the NWSL Player Allocation. She opted out of play during the 2020 NWSL Challenge Cup and the NWSL Fall Series. Utah Royals FC folded in December 2020 and her playing rights were transferred to Kansas City NWSL.

Scott has previously represented Canada on the U-16 and U-19 youth teams. After being called up to the senior squad by Carolina Morace, she debuted at the 2010 Cyprus Cup and participated in her first FIFA Women's World Cup at the 2011 event, making two substitute appearances. Under coach John Herdman, Scott became a regular pick and won a gold medal at the 2011 Pan American Games.

At the 2012 London Olympics, Scott won praise for her performances in the defensive midfield role, drawing comparison to the male player Edgar Davids. She had a major contribution for the team in the bronze medal game, clearing a ball off the line in defence of the goal to keep the score even at zero. Upon return to her native Winnipeg, Scott was serenaded with chants of her name and outbursts of song consisting of the Canadian national anthem at the Winnipeg airport. Scott took note of the welcome with pride saying that "I’m a very emotional person. To come home and hear my name being screamed... I'm holding back tears right now."

Scott is an assistant coach at her alma mater, University of Manitoba. She was an assistant coach for the West Kildonan Collegiate from 2003 until 2005. She also coached at the South End United Soccer Academy, and ran camps for kids while playing with the Vancouver Whitecaps and the Canadian women's national team. Scott has also run soccer clinics and camps, and was presenter and instructor for a number of different high school clubs in Winnipeg.

Scott has been an ambassador for the Homeless World Cup since 2014.

Scott is an athlete ambassador for KidSport Winnipeg, a charity that aims to remove the financial barriers to playing sport, and runs an annual soccer camp for girls on behalf of KidSport Winnipeg.

All content from Kiddle encyclopedia articles (including the article images and facts) can be freely used under Attribution-ShareAlike license, unless stated otherwise. Cite this article:
Desiree Scott Facts for Kids. Kiddle Encyclopedia.