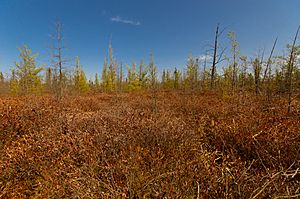 The Dewey Marsh began its early days as a hunting and fishing trading post with the local Native Americans. The Dewey Marsh was later purchased by the Wisconsin Department of Natural Resources to preserve its wetland heritage. The Dewey Marsh suffered a great fire in 1974, which burned in the bogs until 1976.

Today, the Dewey Marsh is noted for its public lands and the County's Dewey's Shooting Range.

All content from Kiddle encyclopedia articles (including the article images and facts) can be freely used under Attribution-ShareAlike license, unless stated otherwise. Cite this article:
Dewey Marsh, Wisconsin Facts for Kids. Kiddle Encyclopedia.